As Most Try To Avoid Covid, A Friend's Desperate Effort To Enter Hospital

Jharkhand Ram had brought his friend Harish Chand Kushwaha in the early hours of Thursday to Hyderabad's Gandhi Hospital from Karimnagar, some 160 km away. 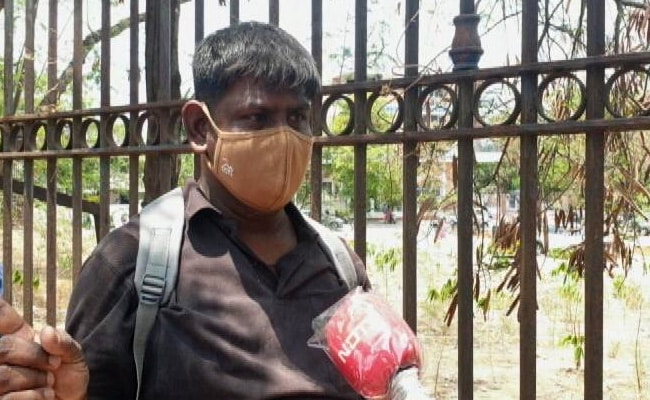 Jharkhand Ram was desperate to help his friend in Hyderabad's Gandhi Hospital.

At a time when people are abandoning their own family members out of fear of the coronavirus, Jharkhand Ram is a ray of hope and friendship.

NDTV met Jharkhand Ram outside the gates of Hyderabad's Gandhi Hospital, which is Telangana's biggest and exclusive government hospital for COVID-19 patients. He was desperate to take some apples and juice for his friend who was admitted in a critical condition on Thursday morning.

Jharkhand Ram had brought his friend Harish Chand Kushwaha in the early hours of Thursday to Hyderabad's Gandhi Hospital from Karimnagar, some 160 km away. Both are from Uttar Pradesh and have been working together in Telangana for the last seven years.

"We started in an ambulance by 2 am. We tried a government hospital in Karimnagar but there was no room there. I went to a private hospital too. There was no oxygen available. So, I brought him here. He has been admitted but I am not being allowed to go and meet him. I request you to take me to him. I want to take care of my patient," he said.

Asked about taking so much risk for a co-worker in the middle of a crisis like this, when many are abandoning their own relatives, Jharkhand Ram turned emotional as he explained why sometimes you don't have to be blood relatives to show care, concern and affection.

But does he not fear for his life? "Jo darr gaya, so mar gaya. No, I am not scared. If we fear, we die. No fear. I want to keep my friend alive that is why I risked my life and brought him here," he said.

Back home in the Ballia district of Uttar Pradesh, Jharkhand Ram has a family of five who are totally dependent on him. His eldest son is in his second year of college, the second in Class 8 and the third in Class 4.

"I know I have a lot of responsibility towards my family too. That is why I wear a double mask. Carry water to wash my hands. Use sanitiser and won't stay long inside. But I need to check how he is doing and get him anything that he may need,'' said Jharkhand Ram.

He said his friend is also father to three children, two girls aged 14 and 11 and a son aged 8. "If I don't give him the best care, it would be an injustice to his family too."

After trying all afternoon, Jharkhand Ram finally managed to go and meet his friend in the evening and pass on some fruit and juice.

"I need to do my best. Don't worry, madam. I didn't stay there for more than 15 minutes. I am his pillar of support. I can't let him down," he said.

7 Deaths At Hyderabad Covid Hospital Due To Suspected Oxygen Shortage