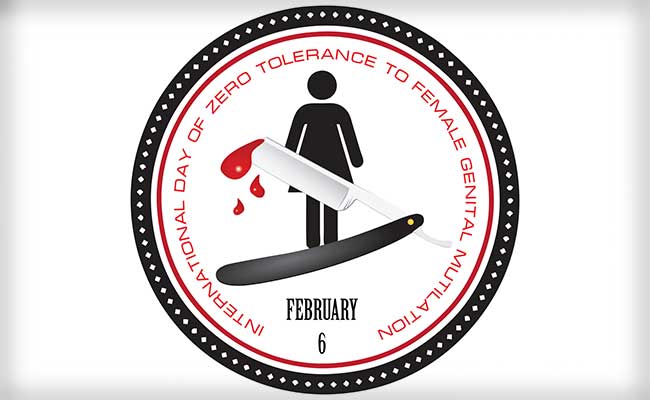 International Day Of Zero Tolerance To Female Mutilation is observed on february 6 every year.

The World Health Organization released its first-ever guidelines on how medical professionals should treat victims of female genital mutilation (FGM), hoping to ease the terrible suffering caused by the widely condemned practice.

The UN health agency estimates that 200 million women and girls have been subjected to FGM worldwide.

Victims are left to cope with a range of consequences from bleeding and pain while urinating, extreme discomfort during sex, fatal complications in childbirth and deep psychological trauma.

FGM is most prevalent in Africa- where it is practiced in some 30 countries despite widespread criminalisation- as well as pockets of Asia and the Middle East.

While doctors in those regions have a poor track record of treating victims, WHO stressed that global migration had increasingly brought the problem to the West, where medical professionals have also been ill-prepared to respond.

"Health workers are often unaware of the many negative health consequences of FGM and many remain inadequately trained to recognise and treat them properly," WHO said in a statement.

Underscoring the global spread of the problem, WHO's at-risk population specialist Lale Say said more than 500,000 women and girls in the United States have suffered from or face the threat of FGM, while some 66,000 women in Britain have been subjected to the practice.

Doris Chou, a maternal and pre-natal health specialist at the UN agency, said that some doctors including in the West do not know "what they are even looking at" when confronted with an FGM victim, a lack of expertise that makes optimal treatment nearly impossible.

With concrete data lacking, developing treatment guidelines was complicated, WHO experts said, and the agency's report notes that some of its recommendations are based on limited evidence.

The guidelines call for FGM sufferers to receive, when needed, psychological support and recommendations relating to obstertics.

One possible consequence of FGM is vaginal closure, which can lead to babies dying during delivery after getting "stuck" in the birth canal, Chou explained.

WHO recommends that health workers perform deinfibulation, a surgical procedure to re-open the vagina, in order to facilitate childbirth.