Obsessive-Compulsive Disorder: Researchers Hope To Help People Who Scrub Their Hands Until They Bleed

Compulsive cleaning affects up to 46 percent of OCD patients, who may feel anxious after a minor contamination, such as touching a doorknob or their own smartphone, according to Baland Jalal, a neuroscientist at the University of Cambridge and the lead author of the Scientific Reports paper.

Thirty-one people were filmed washing their hands with soap at a basin.

Thirty-one people were filmed washing their hands with soap at a basin. Thirty-one were filmed repeatedly touching toilet paper stained using food substances to resemble feces, sprayed with an unpleasant odor and arranged around a fake replica of excrement. And 31 were filmed making a series of random hand movements. Then, they watched the 30-second recordings of themselves - uploaded to smartphone applications - four times a day for a week, at regular time intervals.

Afterward, people in the first two groups could think more clearly - less prone, perhaps, to cry out like Lady Macbeth, unable to wash imagined blood from her hands, "Out, damned spot! Out, I say!"

The 93 people - ages 18 to 64 and differing in gender and level of education - weren't auditioning for a Shakespeare drama. They were subjects in a study, the results of which were published Tuesday in Scientific Reports.

The participants were healthy but exhibited the contamination fear characteristic of Obsessive-Compulsive Disorder, or OCD, defined by the National Institute of Mental Health as a "common, chronic and long-lasting disorder in which a person has uncontrollable, reoccurring thoughts (obsessions) and behaviors (compulsions) that he or she feels the urge to repeat over and over."

Compulsive cleaning affects up to 46 percent of OCD patients, who may feel anxious after a minor contamination, such as touching a doorknob or their own smartphone, according to Baland Jalal, a neuroscientist at the University of Cambridge and the lead author of the Scientific Reports paper. Some react, he said, by scrubbing their hands until they bleed.

"I have seen patients who spend eight hours a day washing their hands," he said in an interview. "It can be debilitating. They're constrained to their homes. It's like living in a prison."

The paper makes the case for a home remedy of sorts, far from a clinician's office, where the traditional approach has been to expose patients to actual dirt and then to prevent them from washing. Another way to allay OCD symptoms, the team of neuroscientists and psychiatrists found, is what's called "technology-based personalized medicine." 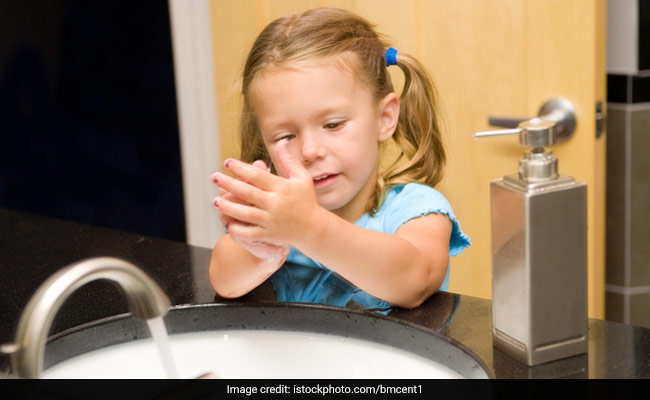 The participants were healthy but exhibited the contamination fear characteristic of Obsessive-Compulsive Disorder
Photo Credit: iStock

In this approach, the experience of washing, as well as of contamination, is captured on video and reduced to the screen of a patient's smartphone, serving the dual purpose of relief and mental calisthenics. The two remedies were tested against the control scenario in which some individuals merely watched themselves gesturing randomly.

Neither intervention - watching yourself washing and watching yourself becoming exposed to apparent dirt - altered actual fear of contamination, which the researchers said may have been a result of the brevity of the experiment. The paper observes that the trials might have been too short to influenced the perceived need to wash, especially for those whose aversion to contamination was deeply ingrained.

Both methods, however, reduced distress levels and the severity of OCD symptoms, as compared to the control condition of the random hand movements, while anxiety and depression were unchanged. Questionnaires and interviews were used to assess the psychological state of each participant according to a handful of scales.

The effect on OCD-like tendencies and mental processing, even "outside one's immediate awareness," was meaningful, the researchers maintained.

"Improvements in cognitive flexibility and OCD symptomatology, particularly in a clinical sample, might over time translate into detectable reductions in contamination fears," they wrote. Most striking, Jalal said, was the reduction in "cognitive inflexibility" - rigid thinking that impairs self-control - which is the core feature of OCD, he added, and thought to mediate excessive washing behaviors.

Jalal said the research arose from his attempt to document "how disgust is incorporated into the brain." In previous studies, he has examined how contamination as well as relief can be transferred "vicariously" - by watching someone else touch something disgusting, or by watching "Joe over there wash his hands."

The phenomenon is related to the "rubber hand illusion," in which people can be made to feel that an ersatz limb, lying before them, is their own. But Jalal wanted to know whether there was a therapeutic effect when the replica was a recording of one's own movements.

"My dream is that some kid in Timbuktu who doesn't have access to health care or psychiatrist can use something like this to get treatment for OCD," he said. The smartphone application that he and others developed at Cambridge is not yet publicly available, as it requires clinical study.

Since the early 1980s, the non-pharmacological treatment of choice for OCD has been what's called "exposure and response prevention," the paper explains. The aim is to help a patient overcome fear by inducing anxiety while blocking the compulsive behavior. A doctor might require exposure to a contaminated object, such as a toilet seat, but then disallow washing.

Yet, as many as 40 percent of patients don't respond to this treatment, the paper notes. Jalal said that many patients drop out of therapy all together.

The apps are easier. "You're in a sense doing a virtual reality experiment of exposure therapy," he observed. The washing video offers relief, and could also lead to the realization that abstaining from the obsessive behavior brings no danger, while the illusion of touching defiled objects "desensitizes you to disgust," Jalal said. The researchers are still trying to determine exactly why both interventions - which seem like opposites - have similar results, reducing distress and improving cognitive flexibility.

The main promise of these methods, the paper argues, lies in harnessing low-cost technology that puts patients in control of their own treatment. The findings suggest that smartphones, which some research has in fact linked to OCD, could also be a tool to reduce compulsive