Tadasana is a simple standing asana,performed at the beginning and end of surya namaskara. Prime Minister Narendra Modi shared a tweet as his animated version demonstrates tadasana step-by-step. 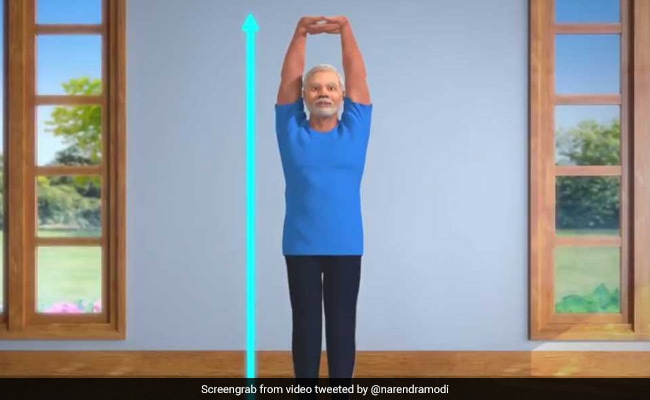 On Thursday, Prime Minister Narendra Modi tweeted a video of his animated version performing the 'Tadasana' that he said prepares the body best for all kinds of yoga postures, ahead of the International Day of Yoga on June 21. The animation demonstrated Tadasana (the mountain pose) step by step and also explained its benefits to the audience.

Alongside the video, the Prime Minister tweeted "Doing Tadasana properly would enable you to practice many other Asanas with ease."

In the 3D video, an animated Prime Minister Modi is seen standing on a maroon rug, with huge windows behind him that gives a glimpse of greenery outside, just like when he posted the trikonasana video on Wednesday.

He starts of explaining how to stand with the feet together, grounding evenly, moving though each posture he asks the audience to concentrate on the breathing.

Doing Tadasana properly would enable you to practice many other Asanas with ease.

Know more about this Asana and its benefits. #YogaDay2019pic.twitter.com/YlhNhcRas8

Tadasana is a simple standing asana, which forms the basis for all the standing asanas. It is performed at the beginning and end of the surya namaskara sequence and is a key asana for all yoga practices.

This asana is helpful for cultivating stillness, strength and a sense of relaxed power. Tadasana can be performed between other asanas to allow the mind and body to absorb the benefits of the previous asana and prepare for the next one, the video says.

With two weeks left for International Day of Yoga, Modi wants every person prepare for the day that was designated as World Yoga Day on his suggestion at the UN General Assembly speech in 2014, and over the last five years it has only improved its reach throughout the world.

Activist Greta Thunberg May Have Coronavirus; Reveals In A Lengthy Insta Post