The woman, Bhavna Kashyap, has detailed the incident in a Facebook post in which she shares her anger and disgust at the attacker, who had stopped her on the road apparently to ask for directions. 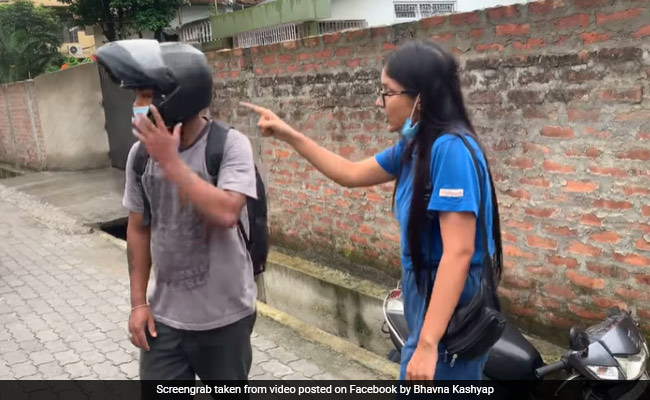 The incident took place in in Rukmini Nagar in Guwahati, police said.

A man who groped a woman in broad daylight in Assam's Guwahati was caught after she held on to his scooty, lifted its rear tyre and dragged it into a ditch to stop him from driving off.

The woman, Bhavna Kashyap, has detailed the incident in a Facebook post in which she shares her anger and disgust at the attacker, who had stopped her on the road apparently to ask for directions.

In the Facebook post that is being widely shared, she names the man and also shares a video. He was arrested soon after the incident on July 30 (Friday), the Guwahati Police has tweeted.

"With reference to the heinous incident of assault in Rukmini Nagar under Dispur PS - FIR 2719/21 has been registered, the accused arrested and forwarded. The case will be brought to its logical conclusion and justice served. We are committed to the safety and security of our citizens," said the police tweet.

With ref. to the heinous incident of assault in Rukmini Nagar under Dispur PS - FIR 2719/21 has been registered, the accused arrested & forwarded.

The case will be brought to its logical conclusion & justice served.

We are committed to the safety & security of our citizens. pic.twitter.com/3gRHzodlqa

In her post, Bhavna Kashyap said the man approached her near one of the busiest roads of the city. When she said she could not hear, he came closer and asked: "Sinaki Path kot ase? (Where's Sinaki Path?)".

She replied she was not aware and suggested he asked someone else.

The next moment, he groped her and what she called a "sudden sexual outburst of rage and aggression on my body". For a second, she wrote, she "lost sense of what had just happened".

When he tried to escape, she acted quickly.

"I spared no second thought and dragged him with the highest strength my body could exhibit in such an uncanny situation. While he kept racing his scooty up, I kept lifting his back tyre and sustained some half a minute of wordless tussle until I could finally push to drag him down into the drain. (sic)," Ms Kashyap wrote.

She said had she let him get away, he would have targeted more women.

In a video, people start gathering and the attacker pleads for help to pull his scooty out but everyone refuses and says he should be reported after they find out what he has done.

The police arrived moments later and took away the attacker.

Ms Kashyap went on to denounce the deeply ingrained psyche that women should not be left alone on the streets and need safety and protection.

"I would like to intimate here that no woman is alone, vulnerable or in need of protection unless a section of society ostensibly holds her responsible for the sick mental processing of these men.

Let not be given birth to a 'Nirbhaya' everyday a man of such psychopathic mentality is born (sic)," she wrote in the post that drew admiration and praise for her response to the assault.