"Lost Everything": Slum Dwellers In Haryana Village Amid Demolition Fears

On June 7, Supreme Court had directed Faridabad Municipal Corporation to remove encroachments in the Khori village, which falls under the protected green area for the Aravalli range, within six weeks. 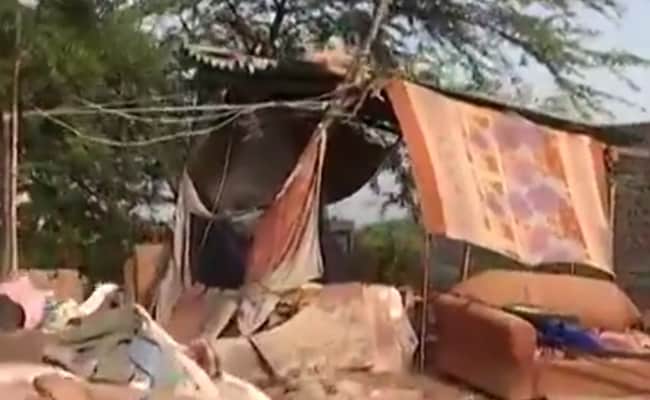 Under forest law, no construction is permitted in Haryana's Khori village as it's a notified forest land.

For 40-year-old Sarvira, life has come to a standstill after her house was demolished by the Faridabad Municipal Corporation in the midst of a pandemic.

She's among the 40,000-odd residents of Khori village, which is part of the protected green area for the Aravalli range, in Haryana's Faridabad district, facing demolition of their "jhuggis" for encroachment.

The deadline being over, demolition is now expected to begin, but no alternatives have been planned for their rehabilitation.

"We have been living here for 15 years. Our houses have been brought down to bricks. We are labour class. We don't have anything. The lockdown took away all our savings. The government had said "jaha jhuggi waha makaan, ab toh jhuggi bhi nahi rakhi (houses will be given where the settlements were there, but now not even slums are there)"," says Sarvira.

As demolition looms for Khori village, 40,000 people may lose houses, villagers ask ‘where do we go?'

On June 7, the Supreme Court directed the Municipal Corporation of Faridabad to remove encroachments in the Khori village, which falls under the protected green area for the Aravalli range, within six weeks. Under the forest law, no construction is permitted here since it is a notified forest land.

But over the years successive governments had turned a blind eye. Many residents say they have resided in these slums for over 30 years.

What especially angers many in the village is their claim that hotels and multistorey residential complexes in this area have not been touched. The Corporation says these buildings have permits.

Many slum dwellers point out that they have Voter IDs or Aadhaar cards too, yet their shelters have been razed.

Tarun Burman, a resident of Khori village, told NDTV, "Behind me, you see 5-star hotels and big buildings which also fall under the Aravalli range, but only the poor is being picked and thrown away."

Ghanshyam, who invested his entire savings in building a house for his family of five, can barely afford two meals a day. And now his house no longer has a roof or a door.

He says, "We have lost everything. When I tried to stop them, they picked a few of us and took us away, and continued with the demolition. Police danda maarti thi (hit us with sticks)."

Haryana Chief Minister Manohar Lal Khattar has said his government was discussing resettlement plans, but only for those who are from Haryana. "This clearance issue is a bit incomplete. Illegal construction has also happened. That is a forest area. Things have happened without permission. But there is a Supreme Court order. Those who are from Haryana, we are discussing about their resettlement scheme," he said.

Earlier this week, a 70-year-old man died by suicide allegedly out of fear that his house would be demolished. His neighbours claimed he was under extreme stress as he had recently taken a loan to build his house but feared its demolition.

One of his neighbours told NDTV, "I got to know that our neighbour, he was some 70 years old, had hanged himself from the tree. He was worried because houses are being demolished here."

Khori residents are also in extreme distress due to a supply cut of electricity and water. Battered by the ongoing lockdown, which has taken away their savings, and facing demolition of their houses, they now ask for either land to stay or be compensated.