Rescuers are carefully navigating their way through the rubble to avoid damaging key supporting pillars of the 18-floor apartment block, officials said. 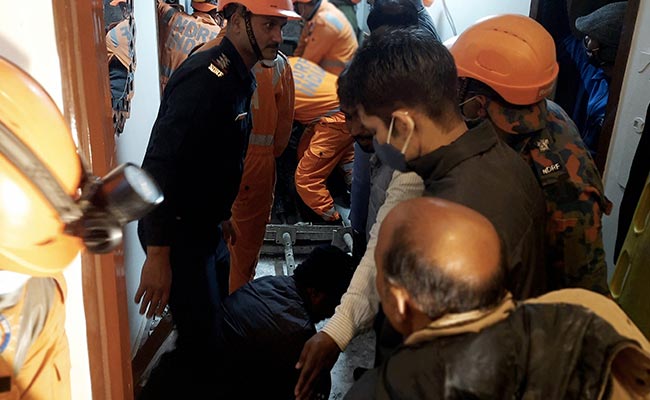 Teams from NDRF and SDRF are carrying out the rescue work. (File)

Panic gripped residents of the partially collapsed apartment building in Gurugram on Saturday as debris came tumbling down amid efforts to retrieve the body of a woman stuck under it for over 40 hours now.

It soon gave way to anger as the residents locked the gates of the society and staged protests, demanding a CBI inquiry into the incident.

Rescuers are carefully navigating their way through the rubble to avoid damaging key supporting pillars of the 18-floor apartment block, officials said, as anxious family members and residents of Chintels Paradiso in Gurugram's sector 109 counted the hours since Thursday evening when the dining room floor of a sixth-floor apartment came down, killing two women.

While Ekta Bhardwaj died on Thursday, Sunita Shrivastava's body has been stuck under the debris for over 40 hours - and counting.

"Damage to any of the pillars could lead to the tower collapsing. Therefore, work of cutting and removing debris is being done carefully," a senior official said.

Sunita Srivastava's husband AK Shrivastava, an IRS officer and managing director with the Central Warehousing Corporation, suffered critical injuries and could be rescued from the debris only after 16 hours of efforts by the NDRF team on Friday.

The police have lodged an FIR at Bajghera police station against the managing director of realty firm Chintels India on charges of causing death due to negligence, Gurugram Deputy Commissioner of Police Deepak Saharan said.

The Gurugram district administration also instituted a probe into the collapse of roofs of the drawing rooms of flats one below another.

With tempers running high, Gurugram MP and Union Minister Rao Inderjeet Singh, who was scheduled to go to Chintel Paradiso on Saturday, cancelled his visit. A spokesperson of the minister said they were advised by administration officials against the visit.

"We were about to reach when we got calls from officials that the matter was being politicised and my visit to the society was not safe, and so, I aborted the visit," Mr Singh said in a statement.

The protesting residents said when they heard the crash of the debris tumbling down, they thought another floor had collapsed.

"We, the residents, want strict action and justice which is possible only when an independent agency like the CBI investigates the case. It is shocking that the police, in its FIR, is dealing with it as just an accident while it was a murder in waiting," said Rakesh Kumar, one of the residents.

District Town Planner RS Bhatt visited the spot and promised action against any erring officials. He said a plan is under way to ensure that no such incident occurs in the future.

Congress leader Ajay Yadav met with the residents and promised his support to their cause.

Chintels India Managing Director Prashant Solomon had said in a tweet, "This is an extremely unfortunate incident and we have taken it very seriously as the safety of our residents is our utmost concern. Upon preliminary investigations, we have come to know that the mishap occurred during renovation work by a contractor being carried out by a resident in his apartment." According to him, the company had conducted a structural audit last year in the wake of complaints regarding the project.

"We will be initiating a second structural audit at the earliest. In case any defects are found in the structure, we will duly compensate affected buyers or accommodate affected residents in alternate arrangements while necessary repair work is completed," Solomon said.

He also said the company is fully cooperating with the authorities and ensuring all support.

Meanwhile, 34 families of the affected tower are lodging with society mates, friends and relatives as the flats become non-liveable.