Gurgaon received a good amount of rainfall on Thursday and monsoon to set to make an onset in the next 48 hours in Delhi and its adjoining areas, Skymet, a private weather forecaster, predicted. 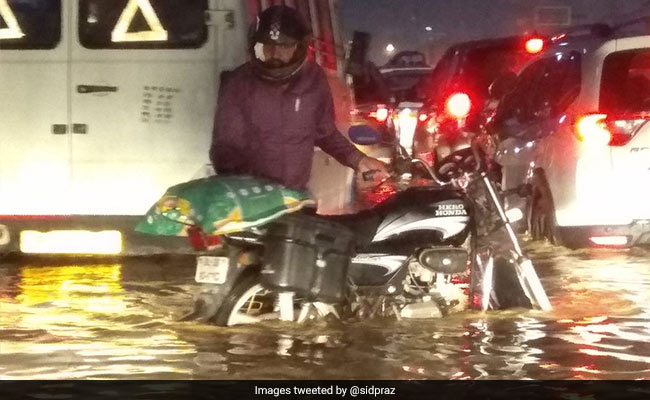 An outraged Twitter complained about the waterlogged roads and massive jams

Days after the sweltering heat, Delhi, Gurgaon and adjoining areas received some respite on Thursday. The afternoon sky blackened, thunder roared, torrential rain poured down and within hours the roads in Gurgaon disappeared beneath several feet of water.

An outraged Twitter complained about the waterlogged roads and massive jams that just 45 minutes of rain led to.

Many were pleased to get some relief from the scorching heat but soon after were appalled at the waterlogged roads that led them to be stuck in traffic for hours.

Gurgaon Roads after only an hour of rain.
Is this the development?#NarendraModi#RainWaterHarvesting Why can't rainwater harvesting be a rule in buildings? pic.twitter.com/HpV0gzxnAN

"It took 40 minutes to get to Hero Honda Chowk from my showroom, which is just about a kilometre away - such was the traffic due to waterlogging. Many two-wheelers were stuck in the middle of the road as water had entered their exhausts, which resulted in their engines shutting off," said Gilles Singh, a commuter.

Some shared videos of the waterlogged roads and expressed their discomfort.

News agency ANI also shared a video of the waterlogged streets and traffic jams in Gurgaon.

Gurgaon received a good amount of rainfall on Thursday and monsoon is set to make an onset in the next 48 hours in Delhi and its adjoining areas, Skymet, a private weather forecaster, predicted.

Although Delhi's short spells of rain brought the temperature down, the humidity shot up to 85 per cent.

The rain broke a 16-day dry spell in Delhi and its adjoining areas. This is the first spell of rain in Delhi since June 2017, Mahesh Palwat of Skymet said.

Intermittent light rains are expected till July 10. Heavy showers are likely after that, Skymet reported.