The Congress legislators and office-bearers staged a demonstration in Panaji at the memorial of Goa's first chief minister, late Dayanand Bandodkar. 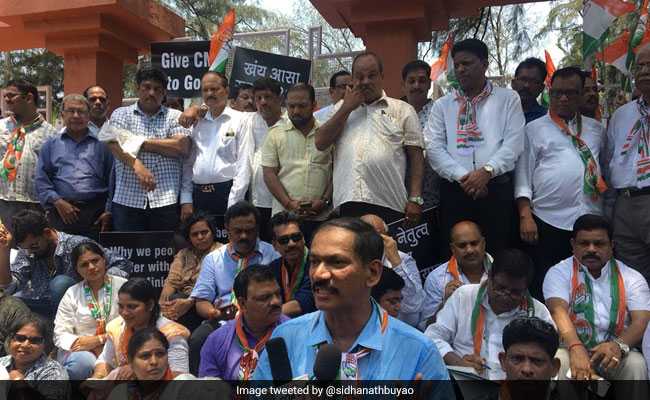 The Congress protest comes ahead of Amit Shah's visit to Goa today.

Panaji: The Goa Congress today demanded the appointment of a "full-time" chief minister for the coastal state in the absence of Manohar Parrikar, who is undergoing treatment in the US.

The Congress legislators and office-bearers staged a demonstration in Panaji at the memorial of Goa's first chief minister, late Dayanand Bandodkar, in support of their demand.

Mr Parrikar, 62, is currently undergoing treatment for a pancreatic ailment at a hospital in the US.

In his absence, a three-member advisory committee comprising cabinet ministers is looking into the day-to-day affairs of the state.

Goa Pradesh Congress Committee chief Girish Chodankar said, "We have petitioned everyone, including the governor, seeking the appointment of a full-time chief minister in the absence of Parrikar, but nothing seems to be happening."

Today, the party workers and legislators assembled at the memorial of Dayanand Bandodkar and "prayed" that the ruling dispensation led by the BJP appoint a full-time chief minister, he said.

Dayanand Bandodkar, the founder of the Maharashtrawadi Gomantak Party (MGP), was the first chief minister of Goa.

After Dayanand Bandodkar's death in 1973, his memorial was built close to the Miramar beach in the state capital.

The MGP, Goa's oldest regional party, is currently a part of the Parrikar-led government.

"The MGP, which was formed by Bandodkar, is a part of the state government, but it also does not have guts to ask for the (appointment of full-time) chief minister," Mr Chodankar told party workers at the demonstration site.

He said BJP president Amit Shah, who is scheduled to visit Goa later today, should look into the "misgovernance" in the state in Mr Parrikar's absence.

Mr Shah is expected to address party workers at a stadium near Panaji during his visit.

Promoted
Listen to the latest songs, only on JioSaavn.com
Mr Chodankar said the Congress will continue with its demand.