Earlier, Forest officials had found carcasses of two tiger cubs inside the forest on Sunday and on Tuesday night. 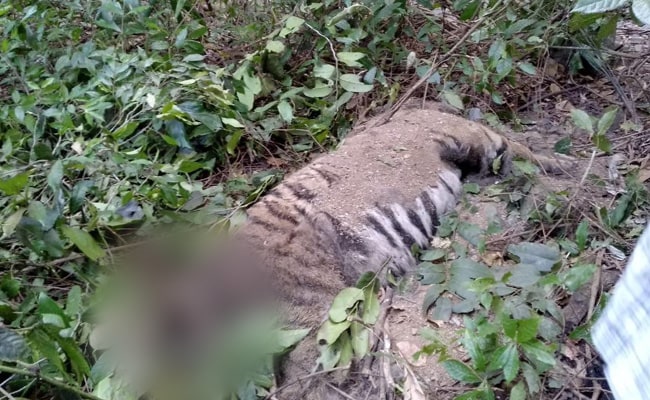 Forest officials had found carcasses of two tiger cubs inside the forest on Sunday.

In the third such incident in the four days since January 5, the carcass of a tiger was found in the Mahadayi Wildlife Sanctuary in Goa on Wednesday, a senior Forest official said.

Earlier, Forest officials had found carcasses of two tiger cubs inside the forest on Sunday and on Tuesday night.

"During the combing operation on Wednesday, the carcass of a tigress, apparently the mother of the two cubs, was recovered in the forests of Golavali village in Sattari taluka, which is located inside Mahadayi Wildlife Sanctuary," the official said.

The latest carcass was found within one km radius from the spots from where two carcasses were recovered earlier, he said.

A tigress and her three cubs were captured roaming in the area on the cameras set up by the Forest department on December 23, 2019.

The Forest department prima facie suspects that the big cats were poisoned to death in a "revenge killing" for preying on cattle of villagers.

The officials had taken four persons from Golavali village into custody on Tuesday.

A combing operation has been launched in the Mahadayi forests to find out if there are more carcasses of tigers, the official said.

A case has been registered against unidentified persons under the Wildlife Protection Act. Goa Health Minister Vishwajit Rane has demanded an investigation by a Central team into the deaths of the two tigers.

Vishwajit Rane, in whose assembly constituency the deaths of the two big cats were reported, has asked Union Environment, Forest and Climate Change Minister Prakash Javadekar to send a team for investigation.

"With reference to the two cubs that have been found dead at Mahadayi Wildlife Sanctuary, Sattari, I would requestion Union Minister for Forest Shri @PrakashJavdekar to intervene and send a central team to conduct a detailed investigation into the matter," Vishwajit Rane tweeted on Wednesday.