Video: Man Holds On To Woman Hanging From Balcony. She Falls, Survives

Though no formal complaint has been lodged, the police have started an investigation and have questioned the man to get a clear picture of the incident. 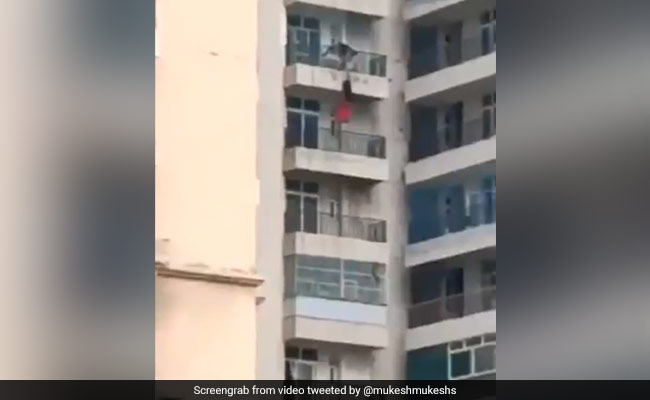 The woman was in the middle of a argument with the man on the balcony when she suddenly tried to jump.

A woman holds on to a man's hand - possibly her husband - as she hangs from the balcony of a high rise in Uttar Pradesh's Ghaziabad. Seconds later, the grip loosens, and she falls as the man unsuccessfully tries to pull her to safety in a horrific video that has emerged on social media.

The woman survived the fall - residents of the society had rushed to place mattresses on the ground - but she is reported to be critical, according to the police. The incident is reported to have taken place on Tuesday evening.

The woman, witnesses have told the police, was in the middle of a heated argument with the man on the balcony of their ninth-floor home when she suddenly climbed over the railings and tried to jump. The man, shocked by the sudden move, managed to hold on to her hand for almost three minutes. Her fall was cushioned, barely, by a set of mattresses placed by the residents of the society.

The woman was taken to the hospital and her condition is said to be critical.

Though no formal complaint has been lodged, the police have started an investigation and have questioned the man to get a clear picture of the incident.

His version will be cross-checked once the woman regains consciousness, a police official said.

"The woman is still unconscious. We will record her statement once she comes to her senses. The picture will be clear only after that," he said.