World Diabetes Day 2017: Number of Diabetics to Double In India by 2023

Individuals with excessive weight are at a greater risk of falling prey to lifestyle diseases. 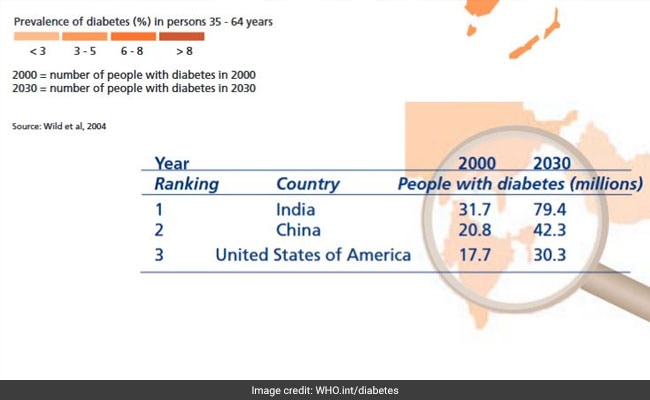 According to the official WHO data, India tops the list of countries with the highest number of diabetics; China, America, Indonesia, Japan, Pakistan, Russia, Brazil, Italy and Bangladesh follow. In the year 2000, the total number of diabetics in India stood at 31.7 million and is expected to rise by more than 100% in the year 2030 to account to a whopping 79.4 million. Diabetes Mellitus is a condition wherein a person is either incapable of producing insulin or the body is not able to utilize the insulin present in the body. While many consider diabetes as an ailment with genetic predisposition, today it has become one of the leading lifestyle ailments. Diabetes is characterized by prolonged elevated blood sugar levels which further expose a person to risk of developing a range of health issues including cardiovascular diseases.

According to National Institute of Nutrition (NIN), consuming a diet balanced in all essential food groups, micro and macronutrients will stave off risk of developing diabetes and a range of other non-communicable, lifestyle diseases. NIN suggests loading up on phytonutrients, dietary fibre, antioxidants "for delaying ageing and preventing the processes which lead to diseases like diabetes, cancer and heart ailment," as mentioned in Dietary Guidelines for Indian, A Manual released by NIN.

Undeniably, individuals with excessive weight are at a greater risk of falling prey to lifestyle diseases such as diabetes. Therefore, besides eating healthy, regular physical activity is of the utmost importance to beat obesity and avoid risk of developing lifestyle diseases including diabetes.