Isha Ambani, Anand Piramal Wedding: All You Need To Know About The Pre-Wedding Anna Seva Event 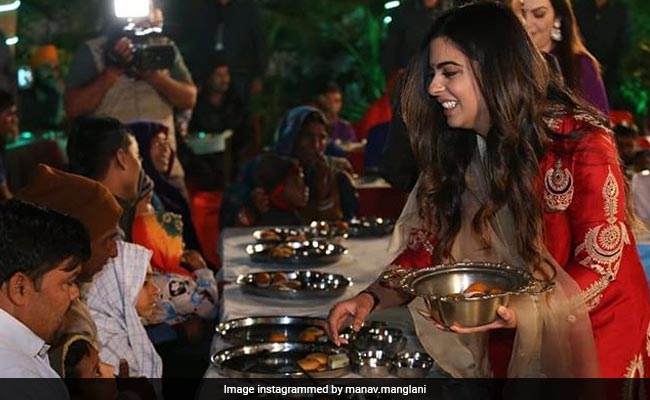 It's the season of weddings and we have seen a string of high-profile celebrity weddings in quick succession, over the past few weeks. After Deepika Padukone and Ranveer Singh, and Priyanka Chopra and Nick Jonas, it's time for businessman Mukesh Ambani's daughter Isha Ambani's wedding to Anand Piramal. The pre-wedding festivities have already begun in Udaipur, with the Ambani family throwing themselves in preparation of the grand affair. All eyes are on Isha Ambani and Anand Piramal's wedding, which promises to be a grand and luxurious affair. Social media is already brimming with the latest updates.The venue of the pre-wedding functions in Udaipur has started getting decorated and the Ambanis kick-started the festivities with an Anna Seva event. The event, which started yesterday, saw the Ambani family feeding 5,100 people from Udaipur, most of who were specially abled.

A PTI report quoted the official statement released by an Ambani family representative which said, "As a mark of respect for the city of Udaipur, and to seek their blessings for the upcoming wedding of their daughter, the family has commenced a special 'Anna Seva'- taking the auspicious task of feeding 5,100 people (majority of them with special abilities) three times everyday from December 7-10, to co-incide with the pre-wedding functions." The pre-wedding functions will be held from December 8 to December 10 and Bollywood celebrities have already started flocking to the city to join in the Indian festivities. As for the Anna Seva event, it is being held at Narayan Seva Sansthan in Udaipur. Pictures from the event, which show the Ambanis and Piramals serving food to people of Udaipur, have surfaced on the internet and are going viral.

Isha Ambani: The Ambani family fed 5,100 people from Udaipur, most of who were specially abled.

Former first lady of the United States, Hilary Clinton has also reached Udaipur to attend the pre-wedding festivities, even as a flurry of celebrities including Priyanka Chopra, Nick Jonas, Karan Johar, Vidya Balan with Siddharth Roy Kapur, Sakshi Dhoni, Sachin Tendulkar and family, have also started flocking to Udaipur. Post the festivities, the wedding will take place on December 12, 2018. This is going to one grand affair and we can't wait to see some beautiful pictures of the wedding.