Duchess of Sussex Meghan Markle has chosen her first solo project as a British Royal and her efforts for the noble cause will warm your hearts! 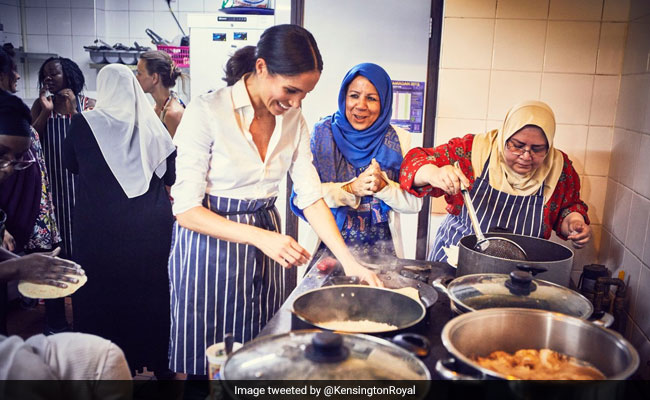 Former TV star and now Duchess of Sussex Meghan Markle has become a household name around the world, after her marriage to Prince Harry of the British Royal family. The 37-year-old is now stepping into a community kitchen to support victims of the Grenfell tower fire which occurred last year. This will be Meghan Markle's first solo project as the Duchess of Sussex as she now helps the women of the families affected by the fire to put together a cookbook called Together: Our Community Cookbook. The Grenfell fire had left 72 people dead and has rendered hundreds of people homeless. In the aftermath of the fire, a group of women at the Al Manaar Muslim Cultural Heritage Centre in West London had started using the space to cook for the victims of the fire.

The official Twitter account of Kensington Palace, announced the initiative by Duchess of Sussex in a video:

The Duchess of Sussex is supporting a new charity cookbook, 'Together: Our Community Cookbook', which celebrates the power of cooking to bring communities together. #CookTogetherpic.twitter.com/XEclxgQjR4

In January 2018, Meghan Markle visited the community kitchen known as the Hubb Community Kitchen and that was when she decided to put together a book with recipes of these women. She was inspired to create a cookbook after she cooked with them, tasted some of their recipes and was fascinated by the variety of flavours and dishes in the kitchen. The community cookbook will feature 50 recipes from the kitchen and will have a self-penned foreword. The proceeds from the sale of the cookbook will be used to fund the kitchen and help it operate full-time.

Profits from the sales of 'Together' will support the Hubb Community Kitchen, helping to keep it open for up to seven days a week and to widen its reach to others in the community #CookTogether: https://t.co/PfmFOfei8wpic.twitter.com/qt0vD25H3U

Currently, due to the limited funds, the community kitchen can only function twice a week. The Hubb Community Kitchen has been regularly visited by the Duchess between January and September in order to know the women and their food better. "I immediately felt connected to this community kitchen", she is heard saying in the video. "Like these women, I am passionate about food and cooking as a way of strengthening communities", she says, adding, "I am proud to be supporting this cookbook, "Together", which features delicious recipes from the women of Hubb Community Center. The proceeds will allow the kitchen to stay open and to thrive, so it can continue transforming lives and communities through cooking."