The video shows Shannen Jones performing a handstand and balancing herself before shooting an arrow at the target with her feet. 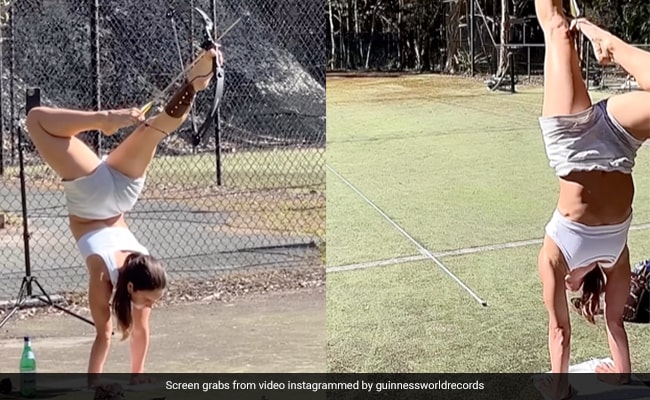 A perfect archery shot can be tough to master, as it requires a lot of effort and patience. However, an Australian woman has left the world amazed with her perfect archery skills and aerobatic prowess. Shannen Jones not just hit the bull's eye, but she did it with her feet while doing a handstand.

According to Guinness World Records, Ms Jones used her feet to shoot an arrow at a distance of 18.27 m in Australia's Queensland last August. She broke the Guinness World Record for the 'farthest arrow shot using feet' and surpassed the previous title-holder by ''just under 6 meters,'' as per GWR.

According to 7News, 23-year-old Jones earned the record by submitting a video to Guinness World Records in August 2022, getting confirmation she'd been successful on January 12.

"Farthest arrow shot using feet 18.27 m (59 ft 11 in) by Shannen Jones," wrote Guinness World Records while sharing a video on Instagram. The video shows Jones performing a handstand and balancing herself before shooting an arrow at the target with her feet.

Notably, she practiced foot archery for over six years before attempting the world record.

A few days back, Ms. Jones also shared a video documenting her world record attempt. "I'm officially a Guinness World Record Holder! "@guinnessworldrecords verified my application last night - So now I can officially say that I am the most accurate foot archer in the world." She also said she had been practising her entire life for the win.

Social media users were more than impressed by her remarkable achievement and congratulated her. One user wrote, "Wow, that must have taken a lot of practice and determination to achieve such an impressive feat!" Another joked, '' Imagine you're the warrior on the other side in medieval times and you're like going berserk on the battlefield and suddenly you see this.''

A third said, ''That's impressive. As an archer and someone teaching his kids archery, that level of skill is highly impressive and the GWR is well deserved. Hard work, training and dedication is vital for success. Congratulations and well done.'' "I'm not near to that, even with my HANDS," shared a fourth.

Apple Watch Saves Life Of Pregnant Woman In US