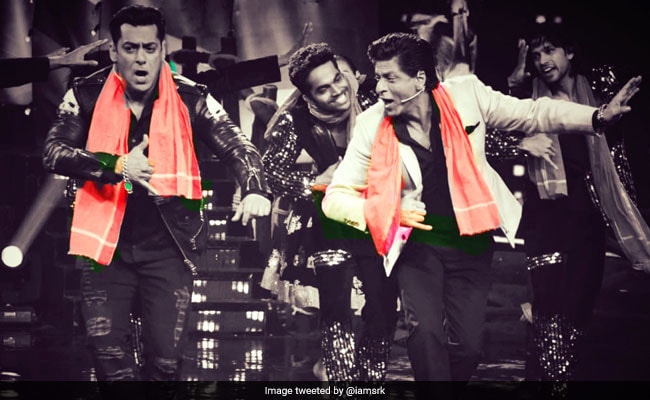 Shah Rukh Khan, who is currently gearing up for the release of Zero, shared a million dollar picture featuring himself with Salman Khan, who has a cameo in the film. On Saturday, SRK shared the picture on his Twitter timeline in which the duo can be seen doing the signature step from Issaqbaazi, a song from his upcoming film Zero, in which Salman also makes an appearance. Just a week prior to the release of the film, Shah Rukh Khan arrived on the sets of Bigg Boss to promote his film and the picture caption sums up that he had an amazing time with Salman Khan. "Bhai ne phir Jiyra Chakna Choor kar diya. Thank you Big Boss and Salman Khan for a great evening starting with Zero love you all," SRK wrote.

Directed by Aanand L Rai, Shah Rukh Khan plays the role of a vertically challenged man Bauua Singh in Zero. At the trailer launch event of Zero, Shah Rukh Khan had said that it was Salman Khan who had suggested the film to him. "It's not true that he (Aanand L Rai) asked a lot of people... Salman had actually called me and said, 'there's this film, do it,' news agency PTI quoted the 53-year-old actor as saying.

Shah Rukh Khan and Salman Khan have been friends for a very long time, however, they had a fall out in 2008. Though the duo met at a few parties and award functions, it was at Salman's sister Arpita's wedding in 2014 that they buried the hatchet.

Zero, which also features Anushka Sharma and Katrina Kaif, will hit the screens next Friday.