"I was dating someone no one knew. It became a bit awkward between us as Sonakshi knew who I was dating then," Zaheer said in an interview 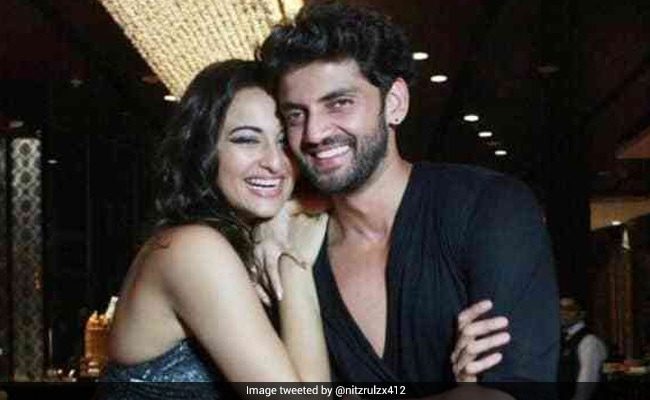 An old pic of Sonakshi and Zaheer (courtesy Twitter)

Notebook actor Zaheer Iqbal, who has featured in headlines for reportedly dating actress Sonakshi Sinha in the past, opened up about his love life in an interview with ETimes. Sonakshi and Zaheer were frequently spotted together at parties between 2018 and 2019 - they arrived together at Salman Khan's birthday party in 2018, ahead of which Sonakshi was also a guest at Zaheer Iqbal's close-knit birthday party. Speaking to ETimes, Zaheer said he and Sonakshi would catch up together sometimes and had a good laugh over the rumours when they first began. "Sonakshi and I laughed after reading the dating rumours. It was my first rumour so I didn't know how to react on it. People have seen all of us. Sonakshi and I chill together and someone must have seen that and might have started the rumour. Well, I'm sure that's how it started," ETimes quoted him as saying.

However, Zaheer admitted that he was seeing someone at that point and Sonakshi knew her. The rumours only made things "awkward" between him and his girlfriend: "On the day this happened, we messaged each other because we got a notification on Google Alerts. Do you know what the mess up was? I was dating someone no one knew. It became a bit awkward between us as Sonakshi knew who I was dating then!" ETimes reported that Zaheer is currently single.

During the promotions of Kalank last year, Sonakshi was asked about rumours of her dating Zaheer, when she said ditched a direct answer in favour of this response: "I think if there was something in that matter to talk about, I will be the first person to come and talk about. I'm toh waiting (Laughs). I'm waiting for love, some prince charming would come, I'm waiting. Nobody is there right now. So when it happens, I feel that I will be very happy about it," reported India Today.

Introduced in Bollywood by Salman Khan, Zaheer Iqbal made his acting debut with 2019 film Notebook, in which he co-starred with Mohnish Bahl's daughter Pranutan. He is yet to announce his next project.