"You Will Be Missed, Feluda": Heartbroken, Twitter Mourns Soumitra Chatterjee 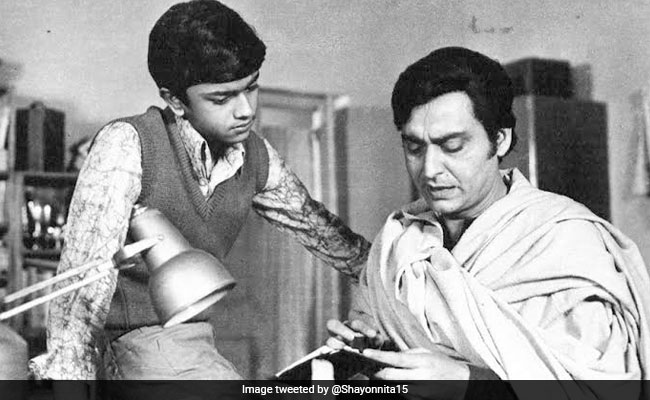 Bengal's celebrated actor Soumitra Chatterjee died at the age of 85 on Sunday afternoon, 40 days after he was admitted to a Kolkata hospital. Soumitra Chatterjee left behind an illustrious legacy of work, among them, one of his most popular onscreen characters Feluda. Mr Chatterjee was the first actor to bring Feluda - the Bengali private investigator, created by Satyajit Ray - live on screen. Soumitra Chatterjee starred as Feluda in two films directed by Mr Ray - Sonar Kella and Joy Baba Felunath. On Twitter, heartbroken fans shared tributes remembering Soumitra Chatterjee as the Feluda they grew up with: "You will be missed, Feluda," read a tweet while another user added: "Where ever you are Soumitra Chatterjee, stay well Feluda."

"I know he has acted in many diverse roles throughout his illustrious career but to me, he will always be Feluda," said an ardent fan of Feluda while another user summed up the emotions on Twitter and wrote: "While the world grew up with Sherlock Holmes, many of us grew up with Feluda."

Actress Sayani Gupta is one among those for whom Soumitra Chatterjee will always be synonymous with Feluda. "Soumitra Chatterjee, Feluda, leaves us. Numb. An era, one generation, a huge legacy gone. Gave 70 years to the Silver Screen," she tweeted.

2020 khub baje. Where ever you are Soumitra Chatterjee, stay well Feluda. I think the greatest ode to you is not Satyajit Ray's Apu but when we read Feluda books, we imagine the character to be you. Rest and Smile In Peace #SoumitraChatterjeepic.twitter.com/g6RsDdYrr6

What an awful day. You will be missed, Feluda. pic.twitter.com/Yc0hBypXZL

Heroes get remembered but LEGENDS never die.......you will always be in our heart Feluda #SoumitraChatterjeepic.twitter.com/lJUrjR1qre

The passing of a childhood hero. I know he has acted in many diverse roles throughout his illustrious career but to me, he will always be Feluda. This one really hurt may he rest in peace pic.twitter.com/xyVQw9xRXO

2020 take another Legend, another icon. You are proud of our Bangali Culture. The Indian Film Industry loses one of its Crown Jewels. Wherever you are, stay well Feluda. Rest in Peace.

While the world grew up with Sherlock Holmes, many of us grew up with Feluda. My love for old Bangla movies is immerse, and they are incomplete without #SoumitraChatterjee..... pic.twitter.com/ldlmZGvMsQ

Soumitra Chatterjee's body of work is second to none of any Indian actor. Probably one of the best in World cinema as well. From Apu to Khit Da, from Mayurbahan to Feluda, there was nothing this man couldn't do. pic.twitter.com/qKAcUOJnlj

Rest in peace dear Feluda. Indian cinema just lost another gem. There can never be another Soumitra Chatterjee. pic.twitter.com/HAEGUY01FX

Feluda, my childhood hero has left us today! God has called him in his heavenly abode for an urgent investigation. RIP #SoumitraChatterjee , doyen of Bengali cinema pic.twitter.com/FSoM7okPnA

Rest in peace Feluda, Apu. I will always remember you with a smile on my face pic.twitter.com/RTmrtUIQWf

Soumitra Chatterjee was taken to Kolkata's Belle Vue Clinic hospital on October 6, a day after he tested positive for the coronavirus. The actor tested negative a little after a week on October 14 but he remained admitted because of health complications, especially COVID-19 induced encephalopathy. On Sunday afternoon, an official statement about the actor's death read: "We declare with heavy heart that Shri Soumitra Chattopadhyay breathed his last at 12-15 pm at Belle Vue Clinic today (15 November 2020). We pay our homage to his soul."