To Wish Her "Camera-Shy" Father On His Birthday, Yami Gautam Posts This Moment From Her Wedding Album

The actress shared the video along with a lovely note. 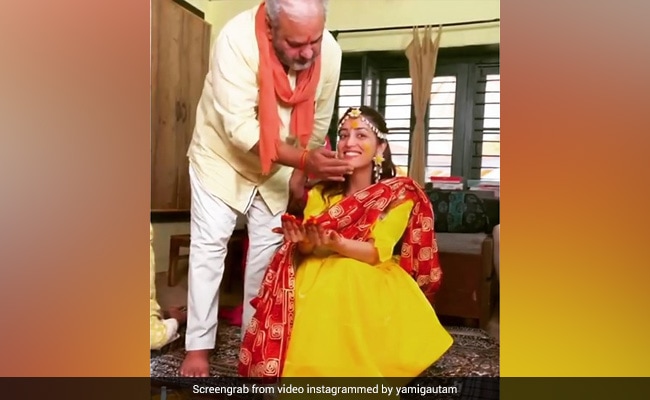 Newlywed Yami Gautam is glowing in the warmth of marital bliss. The actress married Bollywood director Aditya Dhar on June 4. The news of the wedding, held in Yami Gautam's hometown in Himachal Pradesh, came as a pleasant surprise to fans of the artists. Since the wedding, Yami has been sharing photos and videos of the low-key affair on Instagram. Now, on the occasion of her father's birthday, the actress has shared a heart-warming video from the haldi ceremony. The pre-wedding ritual saw the actress being pampered by her family and this time around, Yami Gautam's camera-shy father, director Mukesh Gautam made an appearance.

In the video, the actress' father can be seen applying haldi on a visibly elated Yami Gautam. Along with the clip, Yami Gautam wrote, “It took a wedding to finally have so many moments captured with my camera-shy father. Happy birthday to my amazing paa. And your non-stop commentary is more prominent than all of us present together in the frame, eh Surilie,” tagging her sister who can be heard asking the duo to smile.

This is not the first time the actress has dipped into her collection of wedding photos to wish a loved one on a special occasion. Previously, on the occasion of Father's Day, the actress had shared a photo of her hugging her dad. Yami Gautam's radiant smile in the image is a testimony to the deep bond she shares with her father.

Similarly, on her mother's birthday, the actress shared a photo from her wedding where she is posing with her mother and Surilie. The caption to the photo read, “Every day we become a little bit more like our mother and we couldn't be prouder. Happy birthday, mummy.” They make for a thoroughly stunning family, don't they?

Yami Gautam has appeared in films such as Vicky Donor, Kaabil and Batti Gul Meter Chalu. She will next be seen in Bhoot Police, alongside Saif Ali Khan, Arjun Kapoor and Jacqueline Fernandez. Aditya Dhar, on the other hand, is best known as the director of Uri: The Surgical Strike. The film featured Yami Gautam as a RAW agent.