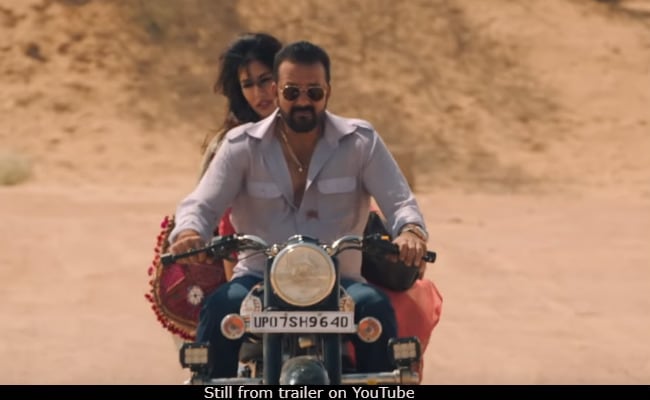 Sanjay Dutt has been shuttling between Lucknow and Mumbai in the recent past and has no time for the promotions of his next film Saheb, Biwi Aur Gangster 3, Rahul Mittra, the film's producer, told mid-day. But that's okay for the makers because they are considerate enough to understand Sanjay Dutt's chock-a-block work schedule. "Sanju has a busy schedule. He has been shooting back-to-back - first Torbaaz and now, Prassthanam," Mr Mittra told mid-day. Following a hectic schedule, the 58-year-old actor had to go on a brief break to recuperate from an unspecified health issue during his stay in Lucknow, for which he's currently making up. "He also fell sick during the Lucknow leg of Prassthanam shoot. So he had to put in more time to compensate for the days lost," mid-day quoted the filmmaker as saying.

However, Sanjay Dutt is not completely done away with promotional duties for the film - he is vigorously promoting Saheb, Biwi Aur Gangster 3 on social media, which also stars Jimmy Sheirgill, Chitrangada Singh and Mahie Gill. "Besides promoting the film on social media, he also attended an event in Lucknow last week. We celebrated presenter Raju Chadha's birthday in Delhi yesterday for which he flew in. He'll also be attending an event today," mid-day quoted Mr Mitra as saying. Directed by Tigmanshu Dhulia, Soha Ali Khan also stars in the movie in an extended cameo of sorts.

In the past week, the cast of Saheb, Biwi Aur Gangster 3 (minus Mr Dutt) were spotted promoting the film across Mumbai. After having missed those, Sanjay Dutt briefly flew into Mumbai to celebrate his wife Maanyata's birthday party. He reportedly left for Lucknow soon after and will only return for his birthday festivities at the end of this month.

Apart from Torbaaz, Prassthanam and Saheb, Biwi Aur Gangster 3, Sanjay Dutt also has films like Panipat and Kalank in the pipeline, both with ensemble casts.