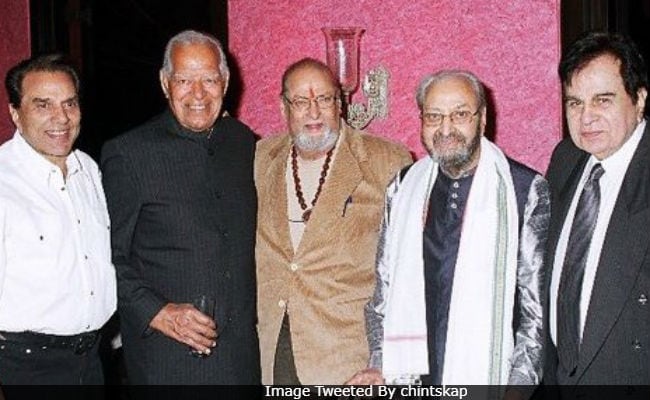 Rishi Kapoor has shared this picture along with the tweet (Image courtesy: chintskap)

Veteran actor Rishi Kapoor recently shared an incident when he was once 'not invited' for late star Pran's birthday party and so, he 'wanted to gatecrash.' Sharing a million dollar picture of Pran with stars like Dilip Kumar, Shammi Kapoor, Dharmendra and Dara Singh, which appears to be taken inside the party, Rishi Kapoor wrote, "How I resent not being here on Pran uncle's birthday. I was not called. I wanted to gatecrash then thought it must be with Pran uncle's friends. Royal China, Bandra was the venue." Rishi Kapoor co-starred with Pran in many films, including 1973's Bobby, which was the 65-year-old actor's first film as a lead star. Amar Akbar Anthony, Karz and Naseeb are some of their other films.

"All the legends together in a single frame" and "what a memorable picture" are some of the comments posted on Rishi Kapoor's tweet.

How I resent not being here on Pran uncles birthday. I was not called. I wanted to gatecrash then thought it must be with Pran uncles friends. Royal China, Bandra was the venue pic.twitter.com/aw4vhoG5pp

Promoted
Listen to the latest songs, only on JioSaavn.com
Rishi Kapoor's upcoming film is Mulk, co-starring Taapsee Pannu. He also has Rajma Chawal in the pipeline.

Meanwhile, Rishi Kapoor's son Ranbir's highly-anticipated film Sanju hits the screens on Friday. It is biopic on Sanjay Dutt and Ranbir plays the actor in the film. Sanju is directed by Rajkumar Hirani.