Anupam Kher shared a picture with the couple on his Instagram 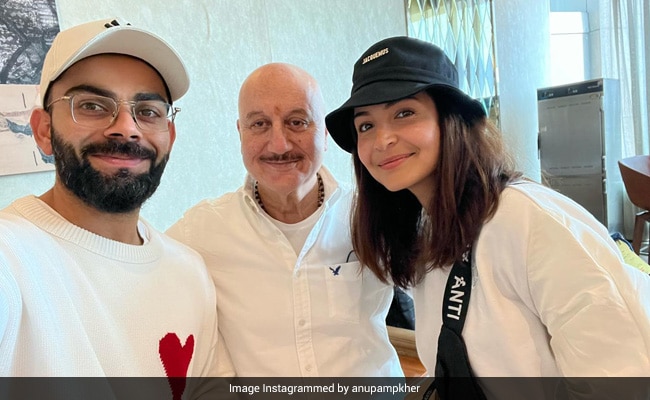 Anupam Kher was "very happy" to meet his Jab Tak Hai Jaan co-star Anushka Sharma and her husband and cricketer Virat Kohli at Mumbai airport today. The trio met unplanned at the airport's lounge. On Wednesday, Anupam Kher shared a picture of himself with the couple and wrote, "I was very happy to meet Virat Kohli and Anushka Sharma at the airport lounge! Their warmth was beautifully infectious! Jai Ho to them!" In the picture, the trio can be seen posing for the camera, while Virat Kohli can be seen clicking the selfie. Earlier today, Virat and Anushka were clicked outside the airport twinning and winning. The couple sported matching white t-shirts paired with black pants. Virat and Anushka were all smiles for the camera.

On the work front, Anupam Kher was recently seen in the films The Kashmir Files and the Telugu film Karthikeya 2.

Meanwhile, Anushka Sharma will be soon seen in the Netflix film Chakda Xpress, which is based on the life of cricketer Jhulan Goswami.

Anushka often shares updates from her film's shoot on her Instagram handle.

Check out a few of her posts here: