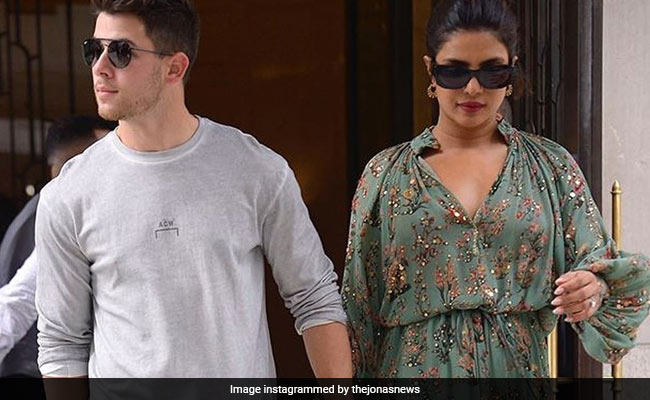 Star couple Priyanka Chopra and Nick Jonas managed to scoop some time from their busy schedules are making the most of their me time in New York. On Saturday morning, the couple occupied a spot on the list of trends after pictures of them walking hand-in-hand on the streets of New York surfaced on social media. The actors did not share the pictures on their respective social media accounts. However, the photographs were curated by several fan clubs dedicated to the couple on Instagram (there are so many). In the picture, Nick can be seen dressed in a casual grey t-shirt while Priyanka can be seen complementing him in a printed outfit.

Take a look at the pictures of Priyanka and Nick here:

Meanwhile, Priyanka Chopra dazzled the red carpet in a red outfit at a Vanity Fair party. The actress made a stunning appearance and she shared a picture from the event. This is what we are talking about:

Priyanka Chopra recently accompanied Nick at the launch party of his tequila brand Villa One. The 26-year-old singer started the brand along with designer John Varvatos. The actress congratulated her husband and she wrote: "So proud. When you own your own tequila at 27."

Priyanka Chopra and Nick Jonas got married in Umaid Bhawan Palace in December last year, where they had Hindu and Christian wedding ceremonies. Priyanka Chopra will next be seen in Shelly Chopra Dhar's The Sky Is Pink, co-starring Farhan Akhtar and Zaira Wasim. She has also signed a film with comedian Mindy Kaling. She has also signed the Netflix adaption of The White Tiger.