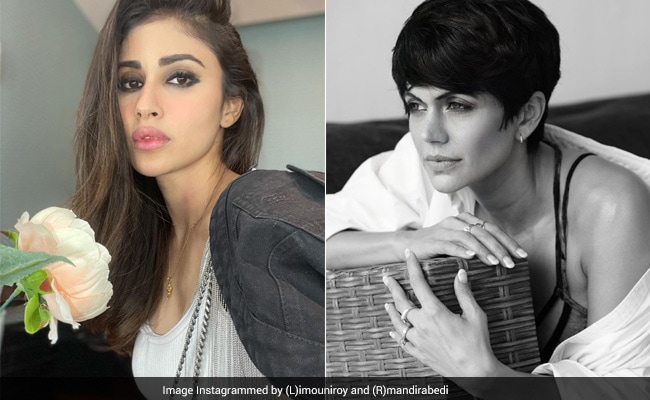 Actress and fitness enthusiast Mandira Bedi, who is an avid social media user, dropped a stunning monochromatic picture of herself on Instagram on Tuesday. Mandira looks super gorgeous in a loose white shirt in the picture from her photoshoot. The actress paired her shirt with a bralette for the picture. She is presumably posing on the couch. Her kohl eyes added an oomph factor to her look. In the caption, Mandira wrote, "Only shades of grey. Life." Her post has garnered a lot of reactions in the comment section. Mandira's BFF and TV actress Mouni Roy also dropped a comment. Mouni wrote, "My beauty."

Recently, Mandira shared another picture of herself from a photoshoot on Instagram. In the picture, the actress can be seen posing on the chair against the backdrop of a window. She looks stunning in her black dress. In the caption, Mandira used hashtags such as #greyday #mondaymood. Mouni had commented on this picture as well. The Naagin actress dropped red heart and smiley emojis in the comment section.

Meanwhile, Mandira Bedi frequently posts glimpses of her workout sessions on her Instagram handle. Take a look at a few of them here.

In terms of work, Mandira Bedi was last seen in web series Qubool Hai 2.0 this year. She is known for TV shows like Shanti, Kyunki Saas Bhi Kabhi Bahu Thi and Jassi Jaissi Koi Nahin to name a few. Mandira made her Bollywood debut with film Dilwale Dulhania Le Jayenge in 1995.

On the other hand, Mouni Roy is popular for her role in TV show Naagin. Mouni has also worked in shows like Do Saheliyaan and Devon Ke Dev...Mahadev. She is now gearing up for the upcoming film Brahmastra. The movie will also feature Alia Bhatt, Ranbir Kapoor and Amitabh Bachchan.

The F.R.I.E.N.D.S Reunion Summed Up In This "Bazillionth Selfie" From Jennifer Aniston's Camera Roll