"It's such a beautiful performance and that too working with seasoned actors like Saif and Tabu," said Kabir Bedi 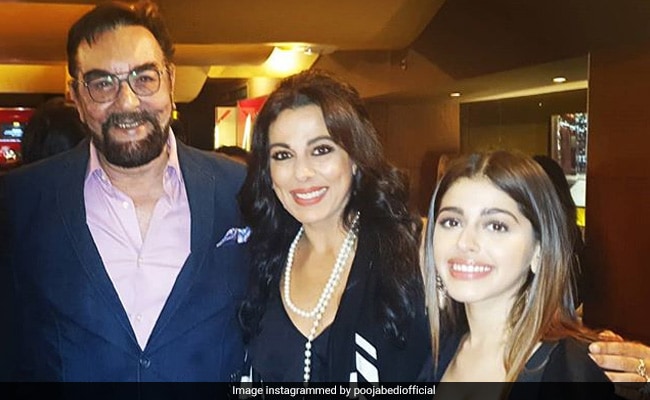 Alaya Furniturewalla, daughter of Pooja Bedi and granddaughter of Kabir Bedi, just made her Bollywood debut with Jawaani Jaaneman. Veteran actor Kabir Bedi, who cheered for Alaya at her film launch last week, told news agency during an interaction how "proud" he is of his granddaughter: "I am so proud of Alaya for the performance she has given. It's such a beautiful performance and that too working with seasoned actors like Saif and Tabu." Alaya plays the role of Saif Ali Khan and Tabu's daughter in Jawaani Jaaneman. "She has worked so hard and prepared so well. So, she deserves every good review she is getting," Kabir Bedi added.

Parveen Dusanj, who accompanied husband Kabir Bedi to the event in Mumbai, also told IANS: "We are very proud of Alaya. She has done a great job in the film." Kabir Bedi married Parveen Dusanj in 2016. This marked Mr Bedi's third marriage - he was previously married to dancer Protima Bedi and then radio and television presenter Nikki Bedi.

Earlier, Alaya's mother Pooja Bedi (daughter of Kabir Bedi and Protima Bedi), had shared this photo of three generation of actors from the Jawaani Jaaneman launch event. "Three generations in film!" she had written, while giving a massive shout out to her daughter on her debut: "Wishing Alaya the very best! Post me your comments on your favourite scene once you see the film."

Three generations in film!!! At the launch of #jawaanijaaneman wishing @alaya.f the VERRRRRRRY BEST! Post me your comments on your favourite scene once u see the film Thank you@jayshewakramani @nitinrkakkar @pooja_ent for a fab film.

Jawaani Jaaneman opened to decent box office numbers and positive reviews, with Alaya's easy breezy performance being talked about by critics. In his review for NDTV, film critic Saibal Chatterjee wrote: "The brightest spark in Jawaani Jaaneman is Alaya Furniturewalla. When you watch a young actress having fun before the camera rather than striving to prove herself, you instantly know that she's one confident performer. She has the chops. Saif will draw you into Jawaani Jaaneman. Alaya will keep you glued even when the pace of the film seems to flag a bit."