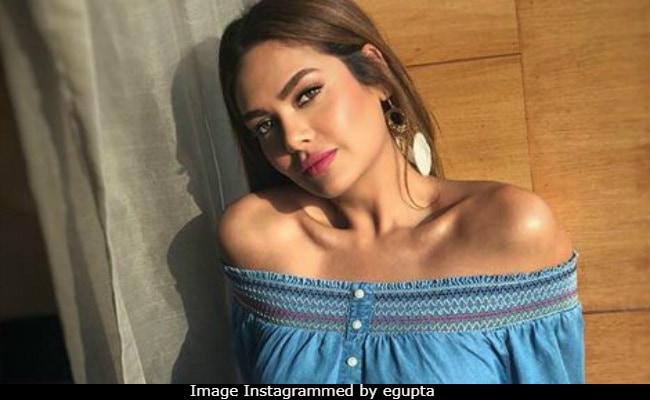 Rumoured couple - actress Esha Gupta and cricketer Hardik Pandya - topped the trends list over the weekend after Esha responded to reports about her speculated wedding at a recent event, as reported by Pinkvilla. According to the tabloid, Esha did not appear to out-rightly "deny being in a relationship" but set the record straight when asked if an impending wedding is on the cards. The Pinkvilla report states that Esha's response was simple and curt - she said folks will know when she's all set to get married but that's not anytime in the recent future: "I'm not getting married anytime soon. I'll let everyone know when I do. Esha Gupta and Hardik Pandya reportedly met at a party a few months back and started dating.

Earlier this year, it was not Esha Gupta who featured with Hardik Pandya in gossip column headlines but Elli Avram and Hardik Pandya trended on and off for their reported romance, which reportedly came to an end in June. Around that time, a report in DNA quoted a source as saying that Esha and Hardik are currently bonding and that they want to avoid the media glare: "Right now, both of them are hush-hush about their budding romance. They want to see how things turn out. They make their lunch and dinner plans secretively and want to avoid the public glare. Currently, they are in the phase where they are getting to know each other."

The source close to Esha also revealed to DNA how the actress and the cricketer got chatting, it was apparently at a party: "They met at a party and hit it off immediately. The duo started chatting up, exchanged numbers and before we knew, they were an item." Hardik Pandya trended big time in April after reports of the cricketer flirting with Urvashi Rautela at a party went viral.

On the work front, Esha Gupta has films like Hera Pheri 3, Total Dhamaal and Paltan in the line-up. Hardik Pandya is currently in England with Team India for the five-match Test series, the first of which India lost to England by 31 runs.