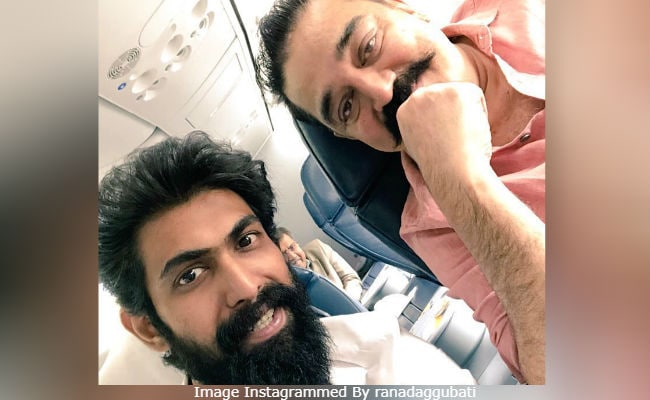 Actors Rana Daggubati and Kamal Haasan found the top spot on Thursday's trends list after Internet chanced upon a picture of them together, shared by the Baahubali star himself. The picture which appears to be taken during a flight has got close to 2 lakh likes (and very much counting). "When you learnt in an hour more than what you've learnt in a year. That means you have met with the legend himself," Rana Daggubati captioned his picture with Kamal Haasan. He is currently busy promoting his film Vishwaroopam 2 and was spotted in Mumbai, where he also shot for an episode with Salman Khan for 10 Ka Dum.

When you learnt in an hour more than what you've learnt in a year. That means you have met with Legend himself @ikamalhaasan

Kamal Haasan's Vishwaroopam 2 is set for an August 10 release. It is to the actor's 2013 film Vishwaroopam. Kamal Haasan reprises the role of RAW agent Major Wisam Ahmad.

Of the film, he earlier told news agency IANS, "I always believe in an espionage film. My eldest maternal uncle was in the police department and moved on to the Intelligence Bureau, so the stories that we heard from him were absolutely on the other end of the spectrum as compared to the James Bond films. We all wanted to join MI6 and he trained with MI6, and the stories that he used to tell were something else. So, I always wanted to get that feeling into films."

Baahubali: The Conclusion, Nene Raju Nene Mantri are some of Rana Daggubati's previous films. He has signed up for the remake of Haathi Mere Saathi.