The trailer of Kamal Haasan's Vishwaroopam 2 is fantastic. Watch out for the superb action sequences 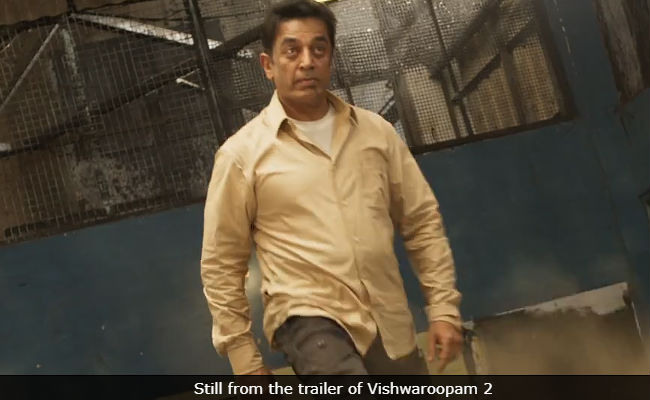 New Delhi: The trailer of Kamal Haasan's Vishwaroopam 2 dropped today and it was worth the wiat. The film is a sequel to Kamal Haasan's 2013 film Vishwaroopam and Mr Haasan and Rahul Bose reprise their roles of RAW agent Wisam and Al-Quada terrorist Omar Qureshi, respectively. The film follows the event after the first part, at the end of which Omar Qureshi escapes the clutches of Wasim. In Vishwaroopam 2, Wasim resumes his task of catching Omar Qureshi and putting an end to the sinister activities he has planned. The film promise state-of-the-art action sequences - the underwater fight scene between Kamal Haasan and Rahul Bose was outstanding. Trust Kamal Haasan to bring a fabulous cinematic experience for the cine-lovers.

Watch the trailer of Vishwaroopam 2:

As promised, Aamir Khan released the trailer of Vishwaroopam 2 in Hindi on Twitter. He shared the link of trailer along with this message: "Dear Kamal Sir, congratulations to you and to the entire team of Vishwaroopam 2! Wishing you all the very best. Love and respect always."

Dear Kamal Sir, congratulations to you and to the entire team of Vishwaroop 2 ! Wishing you all the very best.
Love and respect always.
Aamir.#Vishwaroop2Trailer@ikamalhaasanhttps://t.co/KvxJc8xheF

Promoted
Listen to the latest songs, only on JioSaavn.com
In 2013, Vishwaroopam released after its share of controversies including a demand for title change and initial ban in Tamil Nadu and neighboring states. The film was made on a budget of Rs 95 crore and it ended up collection over Rs 200 crore, making it a super-successful project for Kamal Haasan. Vishwaroopam won several awards in the south and two National Awards.

Vishwaroopam 2 is written and directed by Kamal Haasan and it is expected to hit the screens on August 10.