Virat Kohli And Anushka Sharma, The Cutest 'Mr And Mrs' You'll See On The Internet

Virat Kohli is currently in England for the ongoing 2019 Cricket World Cup. Anushka has joined him on the tour 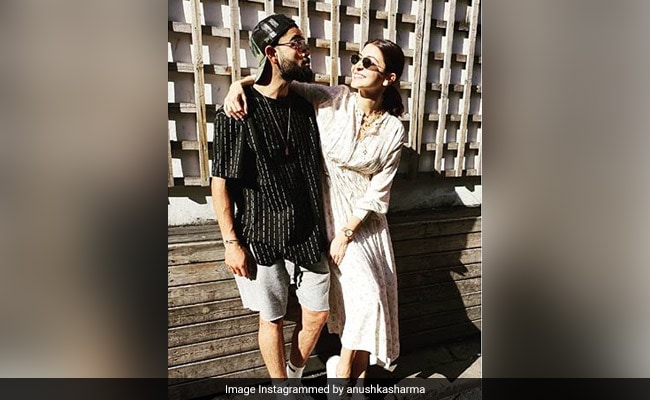 Virat Kohli and Anushka Sharma, who are one of the cutest celebrity couples, have been winning hearts on the Internet with a new set of adorable pictures they have posted on their respective social media profiles. Virat Kohli is currently in England for the ongoing 2019 Cricket World Cup and joining him on the trip is Anushka Sharma. The duo, who frequently share loved-up pictures of themselves, posted two different photos on their respective Insta handles. Virat captioned the picture as "Mr and Mrs" while Anushka wrote: "Seal the silly moments." In the picture shared by Anushka, the actress can be seen posing with her arm around Virat's shoulder but it's the cricketer's epic expression that stole the show. Anushka sports a casual look in a comfortable cream-coloured printed dress while Virat kept it cool in a black striped loose shirt, grey shorts, sneakers and a cap.

Like we have mentioned above, Virat too shared a picture, where both can be seen in the same outfit. In the photo, the proud husband and wife can be seen posing with a photo frame with "Mr and Mrs" written on it.

Take a look at Anushka and Virat's pictures here:

Earlier in June, Anushka Instagrammed a touristy photo of herself from one of her adventures onboard the London tube and as always, Virat made the post extra special for her with an adorable comment. "You are the prettiest all the time my love," he commented on her post.

Virat Kohli and Anushka Sharma got married in a destination wedding in Italy's Tuscany in the year 2017.