Viral: The Shah Rukh Khan Effect - Fans In Beijing Greet Him With DDLJ Mandolin And Shrieks 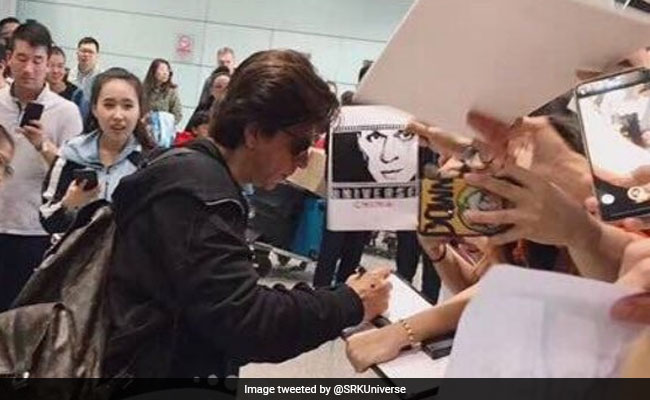 Shah Rukh Khan was warmly welcomed at the Beijing airport by his fans in China recently and videos and photos of the 53-year-old superstar arriving at the airport are crazy viral on the Internet. Several fans of Shah Rukh Khan arrived at the airport with posters and photograph books. A fan was also seen carrying a mandolin, which looked similar to the one that Shah Rukh Khan's character Raj played in the movie Dilwale Dulhania Le Jayenge. Pooja Dadlani, the star's manager, posted a few videos from the Beijing airport on her Instagram profile, which tells us how much of a fan following Shah Rukh Khan has in China. In the video, Shah Rukh Khan was seen addressing his fans and also taking selfies with them while he signed their autograph books.

What a sweet welcome in Beijing.. thank you

Shah Rukh Khan is in Beijing for the Beijing International Film Festival, in which his last movie, Zero, directed by Aanand L Rai, is going to be the closing film. The movie struggled to perform at the box office in India despite its ensemble star cast. Shah Rukh Khan co-starred with Katrina Kaif and Anushka Shama in the movie -played the character of a vertically challenged person named Bauua Singh who belongs from Uttar Pradesh.

Meanwhile, Satyajit Ray's Pather Panchali is also among one of the five Indian films that will be screened in the Beijing International Film Festival. When in China, Shah Rukh Khan will also take part in 'China-India Film Cooperation Dialogue', according to the BIFF brochure, reported PTI.

China has a great market for Indian films. So far, Bollywood movies which have performed well in China, including Dangal, Bajaranji Bhaijaan, Hindi Medium and also AndhaDhun, which is still doing extremely well.