Viral: Sushmita Sen, All Of 18, Preps For UN Speech In Old Clip

An old video of Sushmita Sen has surfaced on the internet 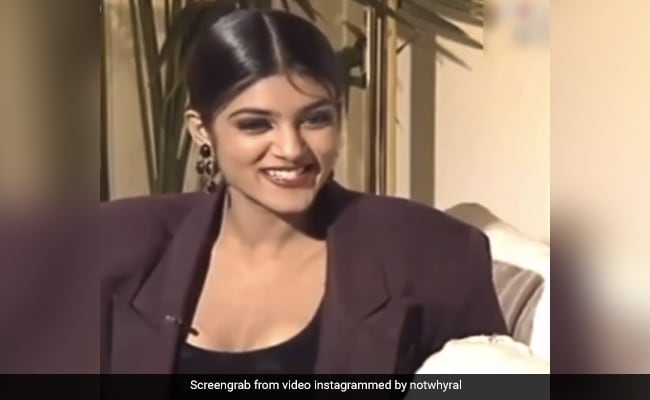 Sushmita Sen in a still from the video.(Image courtesy: notwhyral)

Actress Sushmita Sen has been winning hearts with her amazing work and gorgeous smile ever since she was crowned as the Miss Universe in the year 1994. Now, an old video of the actress has surfaced online, and fans can't stop obsessing over the 18-year-old Sushmita Sen in the video. In the clip that was shared by an Instagram user, Sushmita Sen can be seen preparing for her United Nations (UN) speech. The video features her dressed in a formal blazer as she prepares for her speech sitting on a study table. The actress can also be seen rehearsing for the speech. The clip also features an old interview of the actress, in which she can be seen talking about getting a lot of opportunities at a very young age in her life. "The most important aspect that I am looking forward to is the UN. If that works out fine then just being an active member of the UN is by itself a great job. Because now and for the rest of your life if you want you can be working for it," she said in the video.

Fans of the actress dropped many comments on the post admiring the grace and the confidence of the 18-year-old Sushmita Sen. "Always smitten by her," an Instagram user commented, while another one termed her "Hollywood material." Another fan of the actress wrote: "She is so pretty," in the comments section of the post.

After being crowned as Miss Universe at the age of 18, Sushmita Sen has achieved several milestones in her career. After modelling, she began her career as an actress with Mahesh Bhatt's Dastak in the year 1996. She has starred in several superhit films life Main Hoon Na and Biwi No. 1 . She was last seen in web-show Arya in the lead role in 2020. She garnened a lot of appreciation for her role in Arya.