From Anushka Sharma's hairstyle, it appears the actress was yet to get a make-over when she went exploring her London neighbourhood 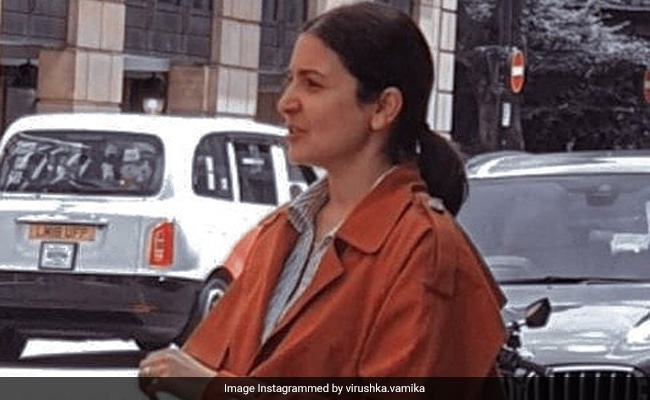 Anushka Sharma on the streets of London (courtesy virushka.vamika )

Hello there, Anushka Sharma! The Sultan actress is currently in UK with her family - husband Virat Kohli and their daughter Vamika - and often shares glimpses of her travel diaries on Instagram. Meanwhile, some new photos of Anushka Sharma walking around in what appears to be London, are being shared by fan-clubs and have gone crazy viral. For her explorations in and around London, Anushka was joined by her five-month-old daughter as the new mom can be seen pushing a stroller in the viral photos. So far, Anushka and Virat have deliberately avoided sharing photos of baby Vamika, only offering glimpses of their baby daughter on Instagram.

Here are the viral photos of Anushka Sharma from London:

From Anushka Sharma's hairstyle, it appears the actress was yet to get a make-over when she went exploring her London neighbourhood. Because earlier this week, here's what Anushka Sharma posted on Instagram about her postpartum hair: "When post baby hair fall makes you appreciate a good haircut even more. Thank you, George Northwood for this. You are fab! And Sonam Kapoor for connecting us."

Meanwhile, she also roped in Virat Kohli for an adorable breakfast selfie: "When you sneak in a quick breakfast and feel mighty victorious." The 33-year-old actress flew to the UK earlier this month, accompanying husband Virat Kohli to Southampton for the recently concluded World Test Championship.