In one of the pictures, the couple can be seen posing with actor-producer JSK Sartishkumar and producer Siva 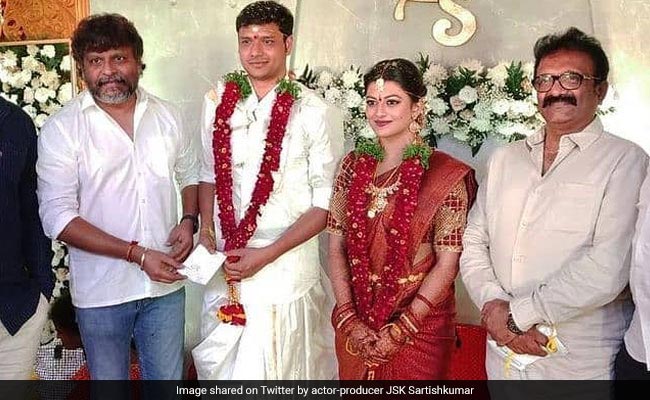 Tamil actress Anandhi got married to assistant director Socrates on Thursday and pictures from her intimate wedding are going crazy viral on social media. Anandhi, who is best-known for her role in films like Kayal and Poriyaalan, looked beautiful in a red saree on her big day while Socrates, who is also a businessman, opted for a traditional off-white kurta-dhoti. Anandhi completed her outfit with a gold dupatta and heavy jewelries. In one of the pictures, the couple can be seen posing with actor-producer JSK Sartishkumar, filmmaker Naveen Mohamedali and producer Siva. Sharing photos from the ceremony, JSK Sartishkumar wrote: "Today at Anandhi and Socrates' wedding. Wish couple happy married life with all prosperity."

Check out the viral pictures from Anandhi and Socrates' wedding here:

Anandhi made her debut in Tamil film industry with Thanukumar's 2014 film Poriyaalan, in which she co-starred with Harish Kalyan. Post that, she went on to work in Kayal, which fetched her the Tamil Nadu State Film Award Special Prize. Kayal, directed by Prabhu Solomon and produced by Madhan of Escape Artists Motion Pictures, also starred Chandran. In 2015, Anandhi featured alongside Atharvaa in Chandi Veeran and co-starred with GV Prakash Kumar, Simran and Manisha Yadav in Trisha Illana Nayanthara.

Anandhi has also worked in some Telugu movies, including Bus Stop, which marked her acting debut, and Priyathama Neevachata Kusalama.