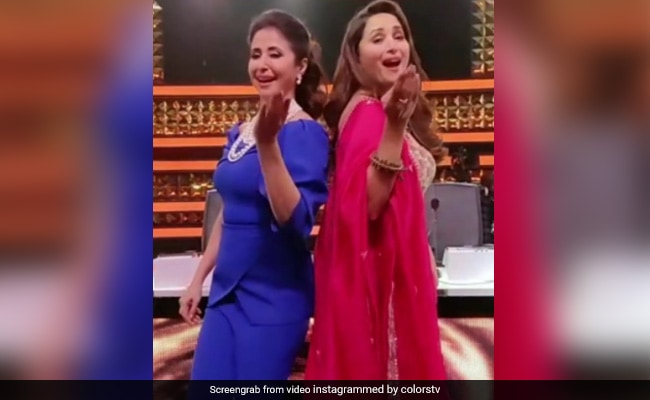 What can one expect when you bring together Madhuri Dixit and Urmila Matondkar, two bonafide divas? Magic. And, that is exactly what happened when the two actresses danced together to the 90s hit Mujhe Pyaar Hua Allahmiya. Madhuri Dixit and Urmila Matondkar recently appeared together as judges on the reality show Dance Deewane 3 and shot the dance video that is breaking the internet, and deservedly so. The song from the 1997 film Judaai originally featured Urmila Matondkar alongside Anil Kapoor. In the video shared on Instagram by Colors TV, the actresses are seen having a gala time as they groove to the track.

Needless to say, the Bollywood queens look stunning in the clip. While Urmila Matondkar chose to wear a blue jumpsuit, Madhuri is seen in a hot pink sharara. Watch the video here:

Today is our lucky day as this is not the only video that the two actresses shot. Urmila Matondkar shared another Instagram Reels of them dancing together. This time around, the duo grooved to Madhuri Dixit's song from the film Saajan. The actress danced to the song, Tu Shayar Hai Main Teri Shayari, which originally starred her and Sanjay Dutt, sending fans into a tizzy. Sharing the video, Urmila wrote, “OMG...Dance just got a whole lot better cos I shake a leg with one and only Madhuri Dixit Nene.”

Madhuri Dixit, too, reposted the video adding that it has been 30 years since the movie Saajan hit the theatres. She wrote in the caption, “Thank you Urmila Matondkar for celebrating 30 years of Saajan with me.” In addition to Madhuri Dixit and Sanjay Dutt, Saajan also featured Salman Khan.

Recently Madhuri Dixit had also shared another video of herself grooving to the retro hit, Jai Jai Shiv Shankar alongside Anil Kapoor. She wrote in the caption, “Retro vibe.”
Reacting to the video, actor Riteish Deshmukh said, “The two of you are magical,” while Ayushmann Khurrana dropped heart emojis.

On the work front, Madhuri Dixit's last release was Kalank with Sanjay Dutt, Alia Bhatt, Varun Dhawan, Sonakshi Sinha and Aditya Roy Kapur. Urmila Matondkar, on the other hand, was last seen in a cameo in the 2018 film, Blackmail.