Viral: A "Truly Iconic" Vintage Pic Of Shah Rukh Khan With Co-Stars From His Theatre Days 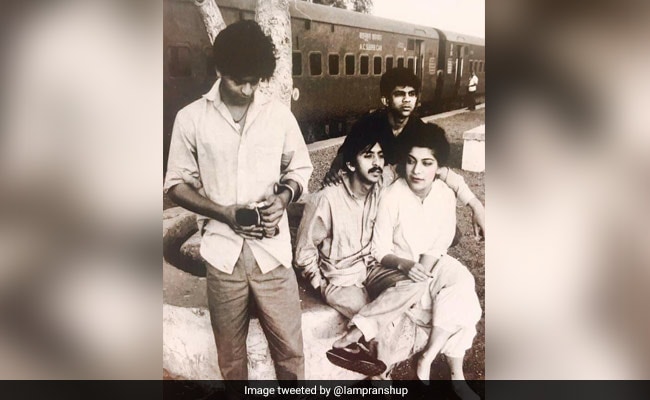 A picture of Shah Rukh Khan from his threatre days - who wouldn't want to see it? Maybe that's why, a vintage photo of the superstar has gone viral on the Internet after a fan page originally posted it on Twitter a couple of days ago. The photo, clicked at a railway station, features a much younger version of Shah Rukh Khan waiting on the platform with his comedy play Rough Crossing co-stars Divya Seth, Sanjoy K Roy and Rituraj Singh. Theatre Action Group (TAG)'s 1991 play Rough Crossing was directed by Barry John, under whom Shah Rukh Khan and even Manoj Bajpayee studied acting in Delhi. The photo was taken when Shah Rukh and his co-stars were on their way to perform the play in Kolkata.

After a fan posted the photo on Twitter, Sanjoy K Roy, who is now the managing director of an event management company, re-tweeted it and wrote: "Truly iconic. Shah Rukh Khan, Rituraj Singh, Divya Seth and me on our way to Calcutta to stage Rough Crossing in aid of Shruti! Directed by #BarryJohn."

Truly iconic @Iampranshup@iamsrk@yourriturajrks divyaseth and me on our way to Calcutta to stage Rough Crossing in aid of Shruti! Directed by #BarryJohn@mohitsatyanandhttps://t.co/526a64JdOb

Shah Rukh Khan started his career in the entertainment industry as a threatre artiste and went on to make his television debut with the 1989 series Fauji. After starring in TV shows like Circus and Idiot, he stepped into Bollywood with the 1992 film Deewana.

Divya Seth has featured in films such as Jab We Met, Dil Dhadakne Do, Sir and Sardar Ka Grandson.