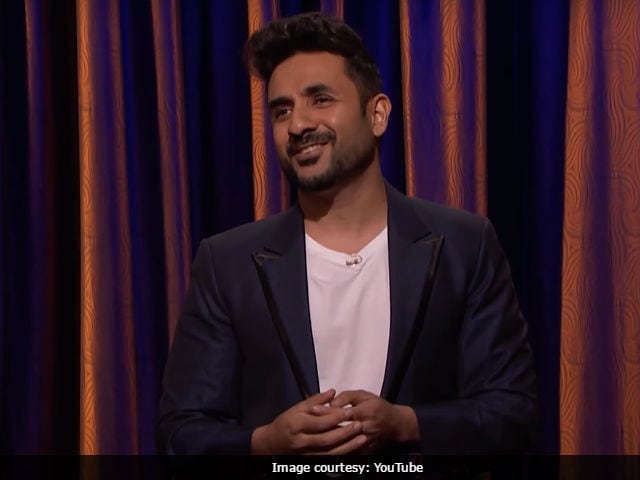 New Delhi: Comedian Vir Das made his American TV debut on Late Night With Conan O'Brien and absolutely killed it. Vir, who was invited to Conan because of his new Netflix show Abroad Understanding, had the crowd ROFL in his five-minute segment in which he skewered his own accent (with a reference to The Simpsons' character Apu Nahaseemapetilon - more about that below), the colour of his skin, arranged marriages, and, but of course, POTUS. "You guys are complaining too much. 'I didn't vote for this guy and now I've got to live with him.' To you Americans, that's a president. To most Indian's that's a marriage. Donald Trump is your arranged marriage," he joked. The video of Vir Das' Conan appearance has been doing the rounds of social media and has been watched over one lakh times.


Backstage, Vir also met actor Hank Azaria - the voice of Apu and other characters from The Simpsons. Vir posted photos of himself with Conan and Hank, who was on the same episode.

A short man meets an incredibly tall one! I'm on @TeamCoco tonight on TBS! Tune in at 11/10c! #CONANpic.twitter.com/BujJESz937

So I met apu and chief wiggum :-) and as we know, they are both one of the funniest men out there! @HankAzaria@TeamCocopic.twitter.com/HA6rZfX9sR

This is what Vir Das tweeted later about his Conan experience:

I say Ladies and Gentlemen when I'm nervous. I was :-)

Vir Das' jokes went down a treat with Twitter. Here's what Rang De! Basanti actor Siddharth had to say about Vir's work:

Dear @thevirdas , so very proud and happy for you. Conan and Azaria are giants! Felt so good to see you holding your own with them. #WIN

Promoted
Listen to the latest songs, only on JioSaavn.com
Here's what people are saying about Vir Das' show:

This is huge. Congratulations Vir! https://t.co/KZJs4Tonuh

Apart from his stand-up comedy, Vir Das is also an actor and has starred in films such as Delhi Belly, Go Goa Gone and Revolver Rani. He was last seen in a small role in Bollywood film Shivaay, starring Ajay Devgn, and in a leading role in 31st October, with Soha Ali Khan.

Nach Baliye 8: What Sonakshi Sinha Has To Say After Missing An Episode