Vidya Balan On Playing Sridevi Onscreen: "It'd Require Guts But I Would Do It"

In her 2017 film Tumhari Sulu, Vidya Balan paid tribute to Sridevi through the revised version of Hawa Hawai. 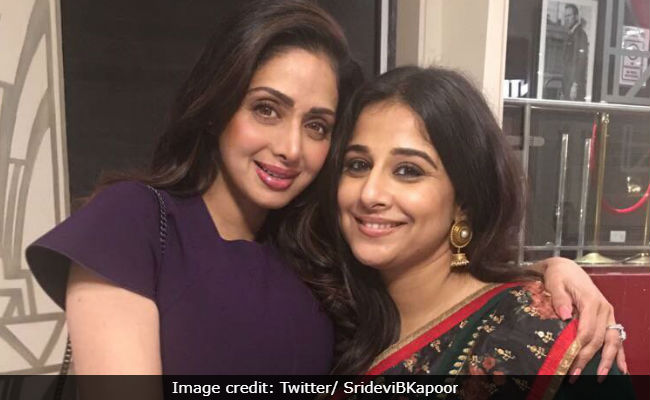 A file photo of Sridevi with Vidya Balan at a film screening. (Image courtesy: Twitter)

Actress Vidya Balan says playing the role of late actress Sridevi on the big screen will "require a lot of guts" but she's A-OK to do it, reports news agency IANS. On television show Starry Nights 2.Oh, Vidya Balan was asked if wants to star in a biopic on the Chandni actress and her reply was: "It would require a lot of guts, but as a tribute to Sridevi, I would do it." In her 2017 film Tumhari Sulu, Vidya Balan paid tribute to Sridevi through the revised version of Hawa Hawai. The song, which was originally picturised on Sridevi, is one of the actress' top songs.

Meanwhile, Vidya Balan has quite an experience of starring in biographical films. She famously played the lead role in The Dirty Picture, which was inspired by the life of south actress Silk Smitha. Recently, she played the role of Nandumuri Basava Ramatarakam in the biopic on NTR.

Sridevi died by accidentally drowning in the bathtub of a hotel she was staying in Dubai in February 2018. After the actress' death several filmmakers considered making a film on Sridevi. Filmmaker Hansal Mehta (Shahid, Aligarh and Omerta) then told news agency IANS that if he would make a biopic on Sridevi, he would approach Vidya Balan to play the lead role.

The filmmaker had said that he was planning to approach Sridevi for a project but he was too late and added: "I will always regret that I didn't approach her and could not make a movie with her. But I will make a film on her." The National Award-winning filmmaker also said: "It (film on Sridevi) will be made. There are actors (who I have in my mind). I might approach Vidya Balan. I will make the film."

Sridevi, the first female superstar of the Indian film industry, has starred in 300 films in a career spanning five decades.