Uri: The Surgical Strike is based on the surgical strikes which were carried out by the Indian army in 2016 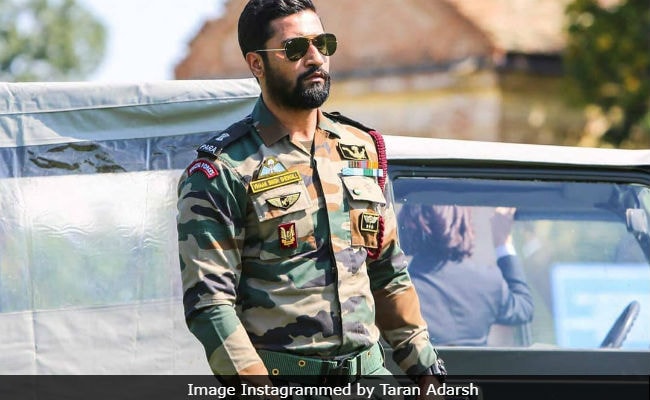 Vicky Kaushal in a still from Uri. (Image courtesy: taranadarsh)

Aditya Dhar's Uri: The Surgical Strike, starring Vicky Kaushal is a "one-horse race." The film which scored a double century in the fourth week of its release, has collected Rs 214 crore as of now, reports Bollywood trade analyst Taran Adarsh. According to Taran Adarsh, the film has been performing exceptionally well at the box office and it earned Rs 1.66 crore on Monday. Taran Adarsh shared the film's box office report on Twitter and wrote: "Uri: The Surgical Strike is a one-horse race... Super-steady on week 5. Fri 2.14 cr, Sat 4.70 cr, Sun 5.66 cr, Mon 1.66 cr. Total: Rs 214.56 crore India business. #HowsTheJosh."

Earlier, Taran Adarsh shared a tweet, in which he wrote that Uri: The Surgical Strike"created history" by "smashing the weekend 5" record held by S Rajamouli's Baahubali 2. In his tweet, Taran Adarsh stated that Baahubali 2 had earned Rs 3.16 crore in the fifth week of its release while Uri had collected Rs 5.58 crore.

Uri: The Surgical Strike did not open to great reviews. Film critic Saibal Chatterjee gave the film 2 stars out of five, in his review for NDTV. However, he praised film's lead actor Vicky Kaushal for his impressive performance and wrote: "Lead actor Vicky Kaushal, on his part, plays a steady hand and delivers the goods to an extent that, at times, seems somewhat wasted on a film that falls well short of being rousing."