"This was truly the most joyous wedding ever, the wedding of a lifetime!" wrote Hansal Mehta 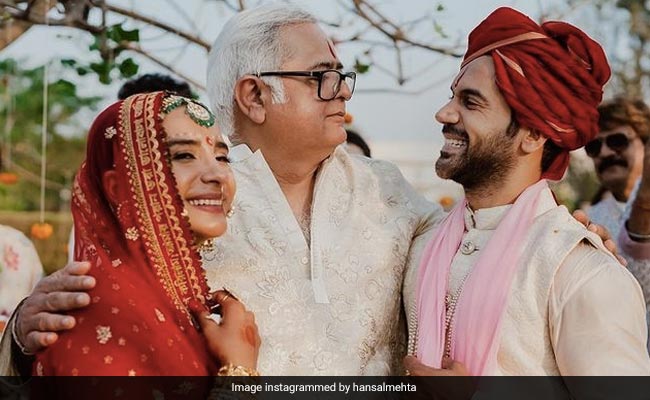 Rajkummar Rao and Patralekhaa's wedding was "the wedding of a lifetime," it was the "most joyous" one ever, as per filmmaker Hansal Mehta, who attended the ceremony in Chandigarh earlier this month. Hansal Mehta, who has directed Rajkummar Rao in critically-acclaimed films such as Shahid, Omerta, Aligarh and CityLights, which also starred Patralekhaa, shared two photos of himself with the couple from their wedding festivities and wrote a heartwarming note for them. "They say that the birth of a child often changes one's fortunes for the better. His entry into my office one hot afternoon changed my life. My son, my friend, my brother, my muse, Rajkummar Rao. I would imagine that to be married to my darling Patralekhaa is just what blessings from the almighty would be like," wrote the filmmaker.

"Two beautiful souls, one beautiful bond and many blessings for all the best things that life has to offer. This was truly the most joyous wedding ever, the wedding of a lifetime!" he added.

Rajkummar Rao has featured in the lead roles in Hansal Mehta's Omerta, Aligarh, CityLights, Shahid and Chhalaang. Their first film together was Shahid, which fetched Rajkummar Rao the National Award for Best Actor.

On his Instagram feed, Hansal Mehta has shared some more pictures from Rajkummar Rao and Patralekhaa's wedding album. Check them out here:

Patralekhaa made her debut in Bollywood opposite Rajkummar Rao in CityLights in 2014. By this time, Rajkummar had starred in critically-acclaimed films like Kai Po Che!, Shahid and Omerta.

Rajkummar Rao made his Bollywood debut with Love, Sex Aur Dhokha. His breakthrough role was in the 2013 film Kai Po Che!. His recent films are Hum Do Hamare Do and Roohi.