Turns Out, Matthew Perry Did The Joker Pose Way Before Joaquin Phoenix

Hello, there! Can we interest you in one helluva post? 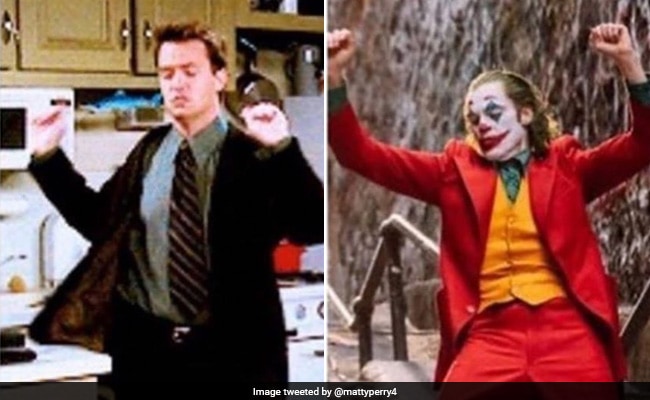 Matthew Perry's latest Instagram post deserves everyone's attention. Why, you ask? Well, for starters, it comes with a dash of the actor's signature humour. Secondly, it features a picture collage of Chandler Bing and Joaquin Phoenix. If you, like us, have been awed by the attention to detail in the collage, Chandler Bing from F.R.I.E.N.D.S can be seen showcasing his goofy albeit adorable dance moves, while Joaquin Phoenix aka Joker, can be seen dancing on a set of stairs in Gotham City - both strikingly similar. As any Joker fan would know, the dance sequence marks an important point along Arthur's narrative journey. Coming back to Matthew Perry's post, the 50-year-old actor wrote: "You're welcome Joaquin."

Matthew Perry, who famously starred as Chandler Bing in the iconic TV series F.R.I.E.N.D.S, finally made his Instagram debut last month. The sitcom also starred Jennifer Aniston as Rachel, Courteney Cox as Monica, Lisa Kudrow as Phoebe, David Schwimmer as Ross and Matt Leblanc as Joey. It followed the lives of six friends living in New York as they navigated personal and professional joys and tribulations, much of it converging around a coffee shop named Central Perk.

Joaquin Phoenix won the Best Actor award at the 92nd Academy Awards for his performance in the 2019 film Joker. Directed by Todd Phillips, the 2019 film showcases the story of a lonely, depressed failed comedian named Arthur Fleck, who slowly turns into a maniac and changes the fate of Gotham City. The film also stars Zazie Beetz, Frances Conroy, Marc Maron, Brett Cullen and Robert De Niro.