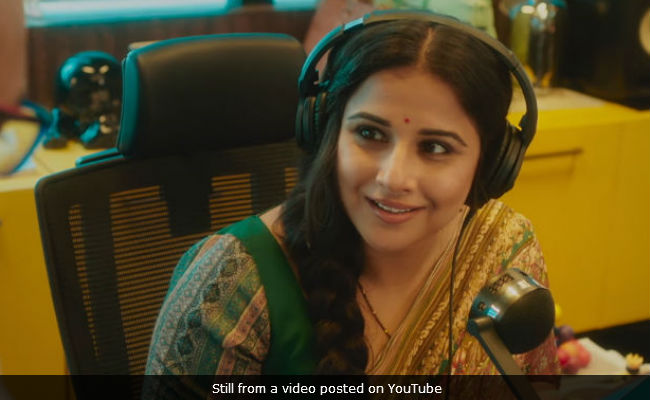 New Delhi: The wait for Vidya Balan's Tumhari Sulu is finally over. The Suresh Triveni-directed film hits the screens tomorrow and it seems the Internet can't keep calm as Vidya's film is already trending. In Tumhari Sulu, Vidya plays the role of Sulochana, a housewife-turned-RJ, who becomes immensely popular for her late night show 'Sari Waali Bhabhi.' How Sulu's new-found stardom affects her interpersonal relationships forms the film's plot. Stars like Shilpa Shetty and Karan Johar have already praised Vidya Balan's work in the film. Here are a few reasons why we can't keep calm about Tumhari Sulu, which releases tomorrow:

We all loved Vidya as a radio-jockey Jhanvi in Sanjay Dutt's Lage Raho Munna Bhai and we can't wait to watch Vidya as a host of a late night show this time. Of her character Sulu, Vidya told NDTV.com: "Sulu is very 'sexy' and I would always prefer listening to Sulu over Jhanvi."

Vidya Balan has payed tribute to actress Sridevi in this version of Hawa Hawai. The best thing about the song is its connect with the original song - through the vocals of Kavita Krishnamurthy (who sang for Sridevi in Mr India). Another Punjabi song from the film Ban Ja Rani sung by Guru Randhawa will surely make you groove to its beats.

Vidya will be seen as a host of the show titled Sari Wali Bhabhi Show in the film. In the teaser, released by the makers, Vidya's trainer asks her to sound 'sexy' while conversing with the listeners over the phone. "Sexy, sexy samjhati ho na tum?," he asks Sulochana. At a gym, Sulu stuns everyone as she is seen talking to a listener and she says, "Aapki raaton ko jagane, aapke sapno ke sajaane, main Sulu. Dil ke button se phone lagaiye aur mere se baat kariye. Karenge na?"

Tumhari Sulu also stars actress Neha Dhupia and RJ Mallishka while Ayushmann Khurrana has a cameo role in the film.

Are you excited to watch Tumhari Sulu? Tell us in the comment section below.
Comments
tumhari suluVidya Balansari waali bhabhi