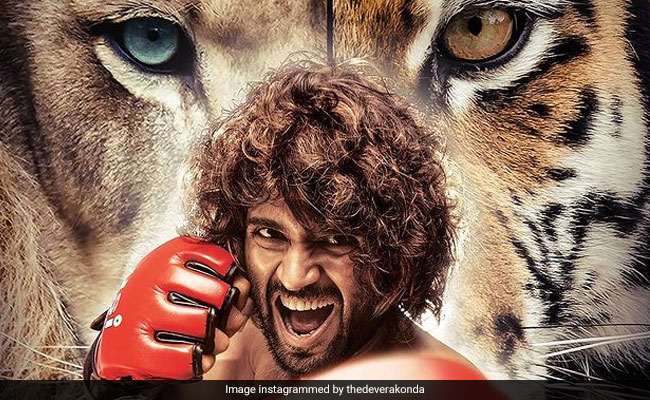 The wait is finally over. Vijay Deverakonda shared his first look from the forthcoming film Liger: Saala Crossbreed and it is intense in every aspect. In the poster, the film's lead actor Vijay Deverakonda can be seen sporting an aggressive look and he can be seen wearing boxing gloves on his hands. We also spotted a tiger and a lion in the backdrop of the poster. Vijay, sharing the poster on Instagram, wrote: "Humbly announcing our arrival Pan India! Someone with my background shouldn't have reached anywhere near here according to the conventions and set norms. But with sheer madness, passion, hardwork, here we are! Nationwide madness guaranteed." The film also stars Ananya Panday and it will be produced by Karan Johar's Dharma Productions along with Charmme Kaur. Puri Jagannadh will direct the multilingual film.

Vijay Deverakonda signed off his post saying, "For everyone like me, it is ok for all of us to dream big, Believe and make it happen." Check out his post here:

Ananya Panday announced her association with the project earlier by sharing a picture with her co-star Vijay Deverakonda and she wrote: "Happy, blessed and excited to be associated for a Pan-India film with our director Puri Jagannadh... Welcoming Mr Deverakonda to Bollywood." This is the post we are referring to:

Speaking of the project that marks Vijay Deverakonda's Bollywood debut, the actor earlier told news agency PTI, "I've started shooting for my first pan-Indian film with Puri Jagannadh. It's a project that required me to undergo drastic physical transformation and I've been working non-stop to pull off the character. I play a fighter and the role required me to learn mixed martial arts."

"That's Just My Face": Jennifer Lopez To Troll Who Insisted She Had Botox