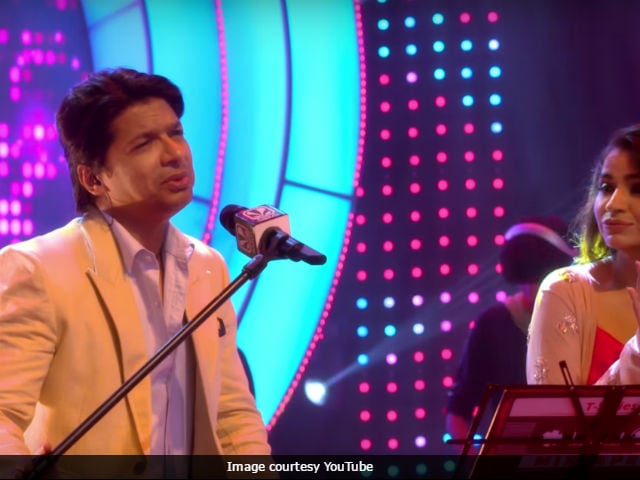 Shaan is known to be one of the most versatile singers (Image courtesy: YouTube)

New Delhi: Singer Shaan recently released a mash up of his old songs Sun Zara from Salman Khan's movie Lucky and Tujhe Bhula Diya from Ranbir Kapoor and Priyanka Chopra's Anjaana Anjaani in collaboration with playback singer Shruti Pathak on YouTube. Shaan shared the news with his fans and followers on social media. "Both these songs are among my all-time favourites.... so glad I got to sing them with the wonderful @shrutipathak9 #Mixtape @TSeries," he wrote. The four-and-half minute track has received a positive response on Twitter and the 44-year-old singer is trending on the Internet. Fans are absolutely thrilled after listening to the mash up and have posted comments such as - 'Hail Shaan as he gives us a masterpiece,' 'I just can't stop listening to this amazing song and amazing voice. I am hooked #Shaan' and '#Shaan's voice is damn soothing.'

This mash up of Sun Zara and Tujhe Bhula Diya is sure to win your heart all over again and refresh your memories. Listen to it here:

Both these songs are among my all time favourites.... so glad I got to sing them with the wonderful @shrutipathak9#Mixtape@TSerieshttps://t.co/zv4orxGMgk

Read the tweets from fans here:

I just cant stop listening to this amazing song and amazing voice. I am hooked #Shaan @/singer_shaan https://t.co/HHi9dP6aVk

Hail #Shaan as he gives us a masterpiece @singer_shaanhttps://t.co/GNZIgH0ChYpic.twitter.com/d8NnvEH5HZ

Last month, Shaan unveiled the mash up of songs Bawara Mann and Gazab Ka Hai Din which have been sung in collaboration with Sukriti Kakkar.

Listen to it here:

Promoted
Listen to the latest songs, only on JioSaavn.com
Shaan is known to be one of the most versatile singers. He has sung Jab Se Tere Naina ( Saawariya), Chand Sifarish (Fanaa) and Behti Hawa Sa Tha Who (3 Idiots).