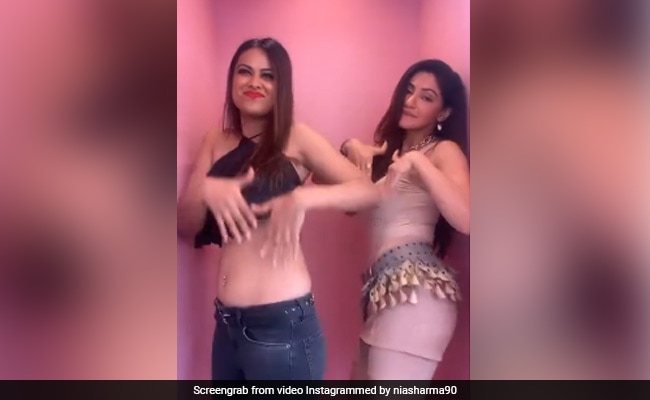 TV actress Nia Sharma is burning up the Internet yet again with her recent Instagram entry. This time, Nia can be seen dancing to the tunes of a peppy number with her friend, actress Reyhna Pandit. The BFFs can be seen dancing in what looks like a phone booth. In the video, Nia Sharma looks as gorgeous as ever in a satin black crop-top and matching jeans. Reyhna Pandit, on the other hand, can be seen dressed in an off-white crop top and brown skirt. They can be seen dancing as the song Bundles by Taylor Glitz plays in the background. Sharing the video on Instagram, Nia Sharma quoted a line from the song and wrote: "Go bad Bi*** go.... Reyhna Pandit." The video is trending on the Internet. Many fans of the actress commented on her post and dropped fire emojis in the comments section.

This isn't the first time that Nia Sharma has sent the Internet into a tizzy. Last week, the actress occupied a spot on the list of trends after a video from her beach vacation went viral. The video features Nia in a white bikini as she enjoys herself at the beach.

Nia Sharma is mainly known for her work in TV shows. She rose to stardom with her role in the TV series Jamai Raja. She has also appeared in shows like Ek Hazaaron Mein Meri Behna Hai and Naagin. Nia has also worked in Vikram Bhatt's thriller web-series Twisted. She has also participated in reality TV show Khatron Ke Khiladi.