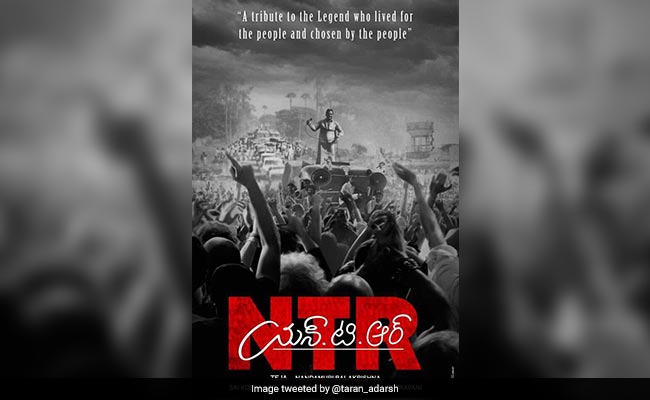 New Delhi: The first poster of NTR - a biopic based on the life of legendary movie actor- director-political leader NT Rama Rao - was revealed today. The poster shows NTR standing on top of a vehicle in the middle of a traffic-clogged road. And in the poster, NTR looked all set to make a speech presumably during an election campaign. NTR's son Nandamuri Balakrishna will play the character of his father in the biopic. NT Rama Rao served as Andhra Pradesh's chief minister for seven years over three terms, from 1983 to 1995. He died on January 18, 1996 in Hyderabad at the age of 72, and the poster was released on his death anniversary.

Tribute to a legend... First look poster of #NTRBiopic... Produced by Balakrishna, Vishnu Vardhan Induri and Sai Korrapati... Directed by Teja... Balakrishna to enact the role of #NTR in the film. pic.twitter.com/JMjPQpONCT

NTR biopic will be directed by Teja and will be co-produced by Balakrishna. Actor Junior NTR, star of popular films like Jai Lava Kusa and Naanaku Prematho, is a third generation star from the Nandamuri clan. Jr NTR is named after NTR, who was his grandfather.

In a recent interview with news agency IANS, Jr NTR said, "I've been given the opportunity to carry forward the legacy with which people associate me. I can't escape it even if I don't like it. I take pride in carrying forward what's been given to me."

Promoted
Listen to the latest songs, only on JioSaavn.com
Earlier, filmmaker Ram Gopal Varma had also expressed his desire to do a biopic on NTR's life. He had also said the film will "shed light on NTR's unknown sides, including his enemies and the people who betrayed him."

The biopic will go on floors later, this year. Teja's last film was also a political drama titled Nene Raju Nene Mantri, which starred Rana Daggubati in the lead role.