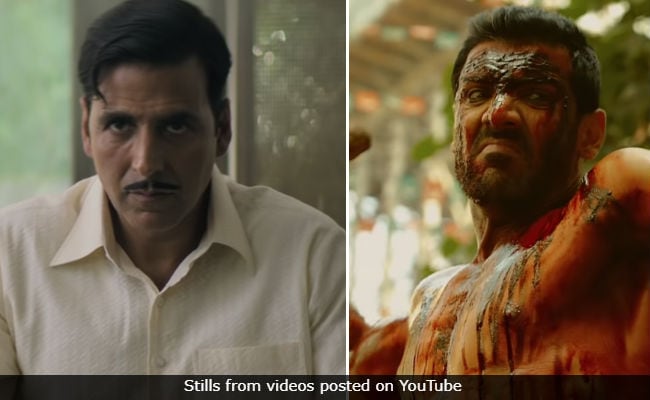 Friday has arrived two days early, folks. On Independence Day today, Akshay Kumar and John Abraham are all set to add to the patriotic feel with their respective films - Gold and Satyameva Jayate. Akshay Kumar knows how to capitalise on the theme of patriotism (remember Airlift and Rustom?). The Reema Kagti-directed film is based on India's historic gold win at the 1948 Olympics in field hockey. The victory meant everything because it was India's first win as a free nation. Akshay Kumar plays the role a passionate hockey coach, Tapan Das, who has made it his life's mission to ensure India wins the first Olympic it is competing as a free nation. Actors Amit Sadh, Vineet Kumar Singh, Sunny Kaushal and Bhawsheel Singh Sahni feature as hockey players handpicked for the team by Tapan Das.

Gold is also television actress Mouni Roy's Bollywood debt film. Mouni, who became a household name after starring in the Naagin series, plays Akshay's onscreen wife Monobina, who like others is skeptical if Tapan will be able to pull off his dream but later applauds his efforts.

Watch the trailer of Gold:

On the other hand, actor John Abraham is set for a box office battle with Akshay with his film Satyameva Jayate. The Milap Milan Zaveri-directed film is a fictional story of a cop-turned-vigilante who will not stop until he has put an end to the corrupt deeds of men which harmed the innocent and in the process avenge one of his family members, whose image was tainted by someone's else's misdeeds. Against

Satyameva Jayate is packed with high-octane action sequences and dangerous stunts, which promises to keep the viewers on the edge of their seats.

Watch the trailer of Satyameva Jayate:

Speaking about their clash of their films, John Abraham (who is a close friend of Akshay) told news agency IANS: "Akshay is an actor in Gold and I am an actor in Satyamev Jayate. It's a producer's decision from both sides. It is about Excel Entertainment and T-Series, so I have no say in that at all. As far as competing with Akshay is concerned, I want to make it clear that he is my senior in the industry."

Decided which film are you watching first?