The title of Shah Rukh Khan's much-anticipated film, directed by Aanand L Rai, will be announced on New Year 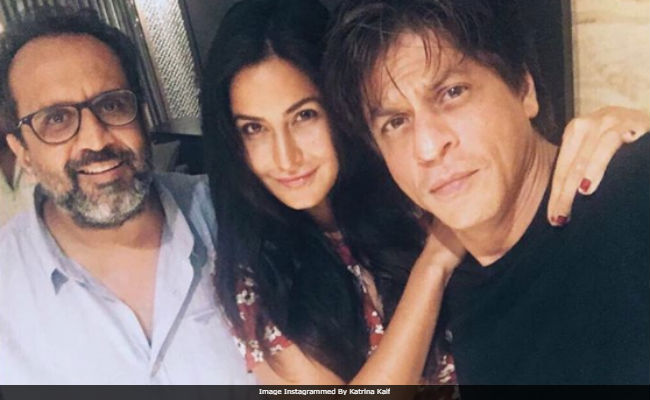 New Delhi: Finally, the title of Shah Rukh Khan's much-anticipated film, directed by Aanand L Rai, will be announced today (New Year). The film stars Anushka Sharma and Katrina Kaif, opposite SRK. Both the actresses were Shah Rukh's heroine in 2012 film Jab Tak Hai Jaan. The 52-year-old superstar announced it on Twitter and wrote, "And me also waiting for @aanandlrai film Title with the girls and the whole team. Happy New year all u very loved people. #Kal5BajeSRK." He previously shared pictures of Anushka and Katrina, who are in South Africa and Thailand, respectively and in multiple tweets, posted messages from the actresses on New Year and also about the film.

And me also waiting for @aanandlrai film Title with the girls and the whole team. Happy New year all u very loved people. #Kal5BajeSRKpic.twitter.com/1904UTRD08

And the lovely away from the glares extremely Unsingle @AnushkaSharma sends her love to everyone as she awaits the Title of her @aanandlrai film. Thanks my scientist Anushka. #Kal5BajeSRKpic.twitter.com/VV0HVwBZwH

Single minded Katrina waiting for Title of film with @aanandlrai sends her lovely pic wishing u all a Happy New Year. Thank u Katz #Kal5BajeSRKpic.twitter.com/2okhva1yCc

Not only the title, we can expect much more at 5pm today. Read here.

Promoted
Listen to the latest songs, only on JioSaavn.com
The shooting of the film began in September. Aanand L Rai earlier revealed that he wants to release the film later in 2018. "I will take another year and a half. We are targeting 2018 December. Nothing has been decided yet but we will announce the title very soon," he had told new agency IANS.

Shah Rukh Khan plays the role of a dwarf. VFX and special effects will play a significant role in the film.