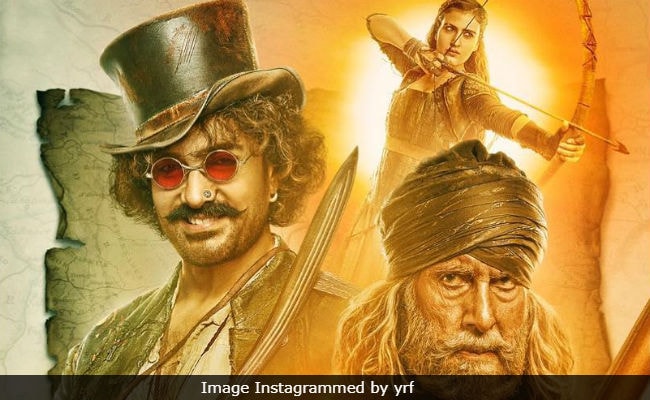 The second poster of Thugs Of Hindostan. (Image courtesy: yrf)

The makers of Thugs of Hindostan released the second poster of the film on Saturday and intense can't even begin to describe it. The poster features all the characters of the film. Aamir Khan, who plays the role of a conman named Firangi, can be seen wearing bright-red glasses and he can be seen sporting a bright smile, while Amitabh Bachchan looks fierce as Khudabaksh (also known as Azaad). Fatima Sana Shaikh surely catches our attention as the ferocious warrior Zafina but we must tell you that you won't be able to take your eyes off Katrina Kaif, who plays the role of a dancer named Suraiyya. The poster was shared on the official Instagram account of Yash Raj Films along with the caption: "The Thugs are ready to light up all big screens near you. Arriving on November 8th!" Amitabh Bachchan accompanied the poster with an interesting caption and wrote: "Yeh Diwali hogi Thug wali."

Check out the new poster of Thugs Of Hindostan here:

Directed by Vijay Krishna Acharya and produced by Yash Raj Films,Thugs Of Hindostan is one of the most awaited-film of the year and it is slated to release on November 8.