Thor: Love And Thunder Review - It certainly helps that the actors driving the movie know their onions inside out and bring to the table a degree of natural flair. 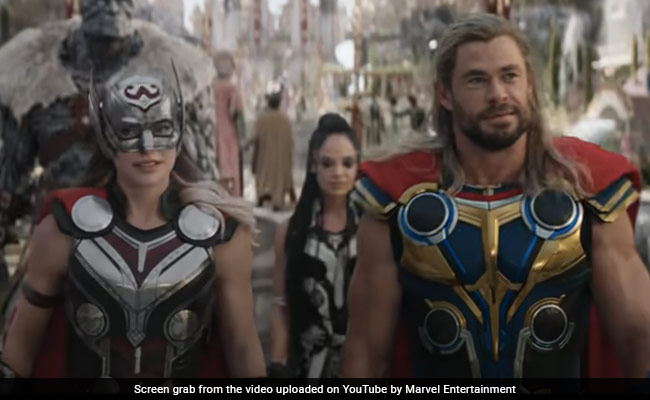 Director and co-writer Taika Waititi brings his quirky storytelling sensibility to bear upon Thor: Love and Thunder pretty much in the way that he did five years ago in Thor: Ragnarok. As a result, the latest MCU movie, fuelled by Chris Hemsworth's proven charm, his chemistry with Natalie Portman, and Christian Bale's effective villainous act, departs in spirit and tone from recent superhero films that have probed darker, more maleficent depths of psychology.

Thor: Love and Thunder starts off on a solemn note that introduces the back story of Gorr the God Butcher. The film then plunges headlong into the world of the self-deprecating Thor, who has been out of circulation for a while and is groping for meaning and purpose in life. He is in no mood to return to action. But the threat posed by Gorr (Bale) compels him to come out of the shell he has retreated into and embark on another "classic Thor adventure" that drifts away from the core of the MCU principles in significant ways.

A slavish replication of narrative rules yielded the disastrous Thor: The Dark World in 2013. Nearly ten years on, the process of reinvention that Waititi began with Thor: Ragnorak gets another welcome push in the right direction. The hits outnumber the misses in Thor: Love and Thunder, adding up to an experience that feels refreshingly bright and jaunty despite the franchise fatigue that one might be dealing with.

Thor teams up with Valkyrie (Tessa Thompson), who is now king of the Asgardians, the ever-loyal Korg (Taika Waititi) and his ex-flame Dr. Jane Foster (referred to once as Jane Fonda and another time as Jodie Foster). She is now a female version of Thor with the Mjolnir having chosen to be her weapon. Thor has to make do with the battle-axe Stormbreaker as he faces off with Gorr, who is armed with the deadly Necrosword.

Their mission is serious: Asgardian children are in grave danger and Gorr is on a rampage that could leave the gods in shambles. Their approach is shot through with a quirky, even perhaps goofy, tone. The fact that it is sustained through the more sombre moments serve to enhance the contrast between the task at hand and the occasional levity of the banter and the efficacy of the romance.

Not all the tropes that the film presses into service deliver the goods, but even when they don't Thor: Love and Thunder does not cease to be thrilling and entertaining because the film does not lose sight of its primary purpose of delivering a superhero saga that also superbly balanced between the sepulchral and the sly. Two screaming goats on one hand and a bumbling Zeus (played with aplomb by Russell Crowe) on the other bring the house down with their antics.

The gods are not only in danger of being eliminated by somebody who has had enough of them, but they are also at the receiving end of ridicule by an angry Thor in Zeus' own lair, the eye-popping Omnipotence City. The God of Thunder's plans to assemble an army of gods to take on Gorr thwarted by a mocking Zeus, Thor steals the former's thunderbolt, leaving the ruler of all Gods with egg on his face.

Thor: Love and Thunder isn't Ragnarok perfect, but the elements that it puts together in its compact two-hour runtime and the flow that it imparts to the action combine to raise the game to a frequently impressive level. A black and white passage devoted to a confrontation between Team Thor and Gorr is among several such passages that the film benefits from.

The writing by the director and Jennifer Kaytin Robinson is consistently inventive. The back-and-forth shifts that the film makes between action and visual effects and humour and romance happen seamlessly for the most part. It certainly helps that the actors driving the movie know their onions inside out (nobody more so than Hemsworth, who times his non-sequiturs to perfection) and bring to the table a degree of natural flair that rubs off on the entire production.

The film conjures up a remarkable colour palette, from the dank darkness of the Shadow Realm to the garish glow of Zeus's Golden temple, as it deals with love and loss, death and defiance, music and magic, bits of science and a whole lot of fancy.

With the mid-credits and post-credits scenes, Waititi and Robinson's screenplay opens up pathways for future Thor adventures and villains with suggestions that Zeus is not going to take his humiliation lying down and that death is not the end of the road for those that are blessed with special powers. These scenes point to the possibility of the opening up of the Thor universe to more of the Waititi brand of wry wit and quirky swings at MCU shibboleths.

The Thor: Love and Thunder villain is special not only because of the way Christian Bale interprets the figure - he evokes the baleful and the psychologically scarred in equal parts - but also because his destructive fury underscores the failures of the gods that thrive on the sufferings of their worshippers. That apart, Gorr has the gods running scared, revealing a facet of the arbiters of fate that exposes their fallibility.

Thor: Love and Thunder bears Taika Waititi's imprimatur all the way, elevating the genre to a plane where it can afford to throw in components that would, in lesser hands, have come across as misplaced. The performances are great, the marriage of style and substance is happy and the promise of what is to come is tantalizing. Without putting Ragnarok in the shade, Thor: Love and Thunder brims with enough zing to stand on its own as a mightily engaging movie, and not just as another superhero flick.