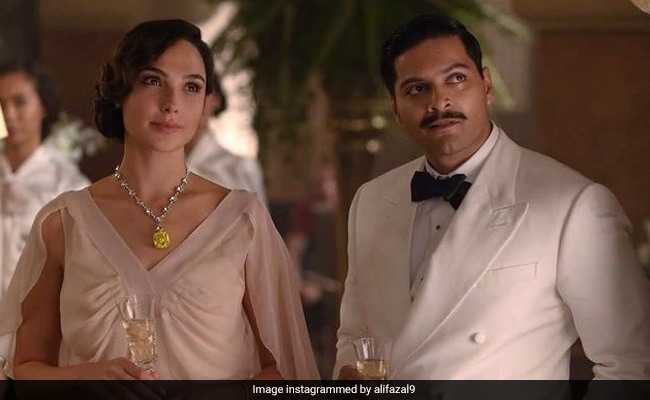 Ali Fazal, who stars as one of the suspects in the murder of Linnet Doyle (played by Gal Gadot) in the forthcoming film Death On The Nile, shared an extensive post on his Instagram handle, where he thanked his co-stars, the film's director Kenneth Branagh, the cast and all the technicians involved with the project. The film brings to life Agatha Christie's novel of the same name. Ali Fazal, sharing a picture with Gal Gadot, wrote: "Death On The Nila in theatre soon. Humbled to have had the chance to be immortalised into one of Agatha Christie's characters . Thank you Ken... And to the wonderful cast for being such a sporty and a fun bunch to share notes and screen with." In the comments section of Ali Fazal's post, Gal Gadot dropped a few heart emojis.

The actor added in his note, "We keep gliding through life sometimes so caught up in the realm of the right and the illusion of the true and the light in the tunnel that we forget to really look past the frame, like the mirror in interrogation rooms. Imagine there's always a bunch of people behind those mirrors, if those rooms were to constitute our lives. Working it just to make us look our pretty best. . I remember the hard work that went in to create these visuals and bring Kenneth Brannagh's vision to life. And sure it can be just a job we do, but then it isn't because we are artists and we don't just move on we take the world with us to places of better value. We flow. So here's to every technician on This film, thank you for your hard work and perseverance. I sure as s*** look good here, and you too."

The film's cast is headlined by the film's director Kenneth Branagh, who stars as Hercule Poirot, the renowned detective who is on board to solve the mystery, and Wonder Woman star Gal Gadot, who has been cast as Linnet Doyle, the murder victim. Armie Hammer stars as her husband Simon Doyle. Besides Ali Fazal, Tom Bateman, Annette Bening, Russell Brand, Dawn French, Rose Leslie, Sophie Okonedo, Jennifer Saunders, and Letitia Wright, are among the suspects on the cruise.

This will be Kenneth Branagh's second outing as Hercule Poirot after 2017's Murder On The Orient Express, which was also an adaptation of Agatha Christie's classic novel of the same name.

This is not the first time that Ali Fazal is a part of an international project. He starred in the 2017 biographical comedy-drama Victoria And Abdul, in which he shared screen space with Dame Judi Dench. Ali Fazal also had a cameo appearance in Furious 7.

Golden Globes 2022: The Awards To Take Place Without Audience Or TV Broadcast